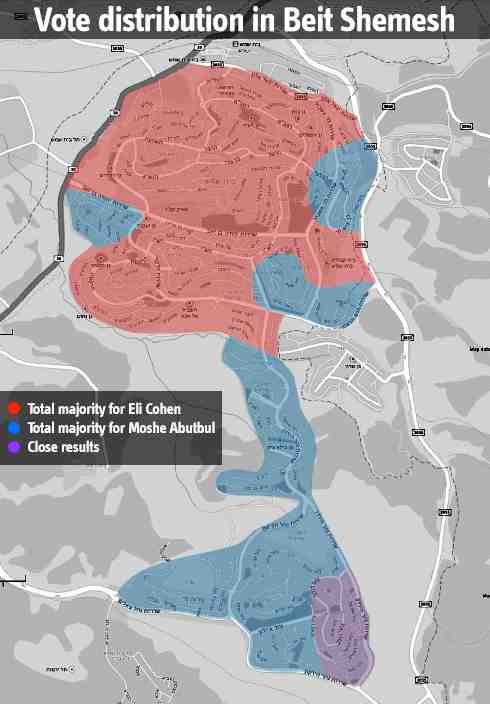 The idea of splitting Beit Shemesh into two municipalities is gaining traction.

Richard Peres, the Beit Shemesh city councilor, has been an outspoken advocate for splitting Beit Shemesh, for at least ten years.

When I first heard the idea from Richard, I felt that this otherwise grounded veteran politician, was losing his touch with reality.

The idea seemed far too fetched to have any practical application.

The highly contentious re-called municipal election campaign is now over, and Moshe Abutbul the incumbent mayor, has been re-elected, if by a wafer-thin majority. Furthermore, the mayor now has a workable majority coalition, with 10 of the 19 councilors firmly allied with Abutbul.

Rather than licking their wounds, and taking time off to recuperate from the double-campaigns in October 2013 and March 2014, the zionist camp, now in opposition, are directing their energies to reviving the dusty plans to split the municipality into two.

The plans proponents are claiming that the time has come to formally recognise the "unsuccessful" relationship between the chareidi and zionist populations. They are calling for a peaceful divorce.

Gideon Saar, the Interior Minister has been reported to be reviewing the possibility of splitting Beit Shemesh for several months, along with a parallel proposal from the city of Sefad.

Several MK's are reported to be promoting the concept at Government level, probably including Beit Shemesh MK Rabbi Dov Lipman - who has the ear of his Yesh Atid colleagues, including Yair Lapid.

This week, a petition was posted to split the city, with 'only' 1556 votes in favour (as of writing this article): http://www.atzuma.co.il/lomevatrimalbetsheme

This Tuesday night, a demonstration has been called by activists in Beit Shemesh to promote the partition plan.

The idea will certainly need a huge amount of details working out, even if it were to be universally accepted in principle. Which it isn't.

For example, I live in Ramat Beit Shemesh Aleph, in the sole area coloured purple on the (inaccurate) election results map above, indicating a mix of Eli Cohen (zionist) and Moshe Abutbul (Chareidi) supporters.

Would me and my neighbors be in the local equivalent of West Berlin, in the new plan?

Or, as I am National Religious, would I be encouraged to move house into the zionist Beit Shemesh?