Tag Machir is NOT Terrorism 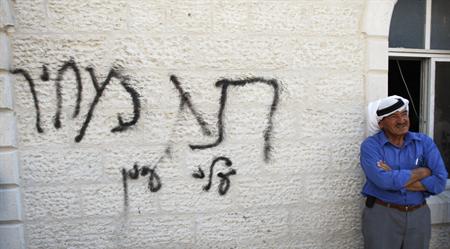 The security cabinet in is currently deciding whether to define "Tag Machir" (literally "Price Tag") as terrorism.

"Tag Machir" is a covert policy developed on the heels of the destruction of Gush Katif, and adopted by some young right wing activists (generally associated with Hilltop Youth) over roughly the past five years. Price Tag is the tactic of  responding to acts perceived as anti-settler by writing graffiti and vandalising either Jewish or Arab property.

"Anti-settler acts" can include demolitions of Jewish homes by the Government and acts of terror by Palestinians. It is not necessarily measure-for-measure, and Arab property can be vandalized in response to acts of the Israeli Government, and vice versa. A certain randomness increases the effectiveness, and seems to have made it more difficult for the authorities to find and convict culprits.

Time after time, kids have been arrested and released. Some have been charged. I am not aware of a single case which has resulted in a conviction.

There are widespread rumours that many of the acts publicized as "Price Tag" were committed by provocateurs. Black paint is commonly available, and anyone can write  "Tag Machir" on a wall or parked car; the left-wing media does the rest.
It is the frustration of the authorities which has resulted in huge resources being poured into the Jewish Dept of the Intelligence Services ("Shabak"), who now number up to a hundred agents (far more than any estimate of the number of active culprits).

And now the proposal on the table at the Security Cabinet that the policy of "Tag Machir" be defined as "terror".

Such a redefinition would enable the authorities to stamp down on suspects, whose civil rights will be drastically reduced.

Police investigation techniques, such as communications tapping, effectively-random round-ups of suspects and borderline torture, may all become permitted to the authorities.

Arrests and detentions will require minimalistic evidence or proof, and even minors (most of the alleged culprits are under 18) could be subjected to long detentions without requiring the judicial reviews and accountability required by the 'regular' criminal legal system.

For example, according to  a member of Honenu, the right wing legal-rights organization, who I spoke with, the definition of 'terror' will enable the detention of minors for 7 days without even access to a lawyer.

Honenu further posits that this new redefining of graffitti as an act of terror, will encourage me-too imitiations. The ease of anyone painting up "Tag Mechir" on a wall and the resultant public exposure and outcry, will encourage numerous miscellaneous provateurs and nuts to join in.
And convictions will result in far more severe sentences. Acts of terror, or security crimes, carry significantly longer jail terms than damaging property.
Meanwhile, the heavy-hand of the anti-terror units & Shabak will likely force alleged Tag Machir culprits, and any of the hundreds of kids who believe they may be mistaken for one, to go underground. Living in safe-houses, or remote caves, hiding out for months, even years. I know kids who resorted to this even under the current regime.

Legitimate political dissent and protest will be stymied by the slur "terrorists".

According to Honenu, protest organizations could have their funds seized and their members be arrested as "members of a terror organization".

Once labeled as "terrorists", the media is most unlikely to highlight resulting  human rights abuses.

By defining Tag Machir culprits as "terrorists" (people who bomb buses and cafes and murder innocent civilians in the name of a political cause), rather than Vigilantes (people who take the law into their own hands, meeting out "justice" and "revenge" without authority or due process) or Graffitists, I fear the Government is setting the scene for another "Season".

"The Season" was the term given for the Hagana's policy of summary 'justice' for the members of the Lechi and Irgun resistance movements.

Or more recently, following the horrific assassination of Prime Minister Yitzhak Rabin, the witch-hunt which was launched against the National Religious public and leadership.

In the sweeping changes being introduced by the new Government – it is critical not to let exaggerated political slogans be turned into National Laws.


Mass arrests of teenagers and abolishing judicial process? No.