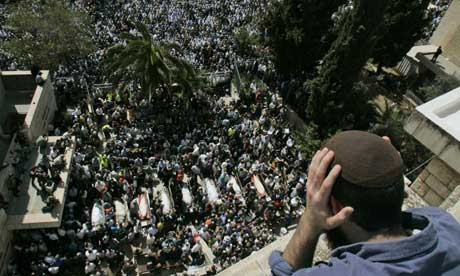 According to the news reports this week, several students from Yeshivat Yerushalaim Letzeirim ("Yashlatz"), the yeshiva high school of Mercaz Harav Yeshiva in Kireat Moshe, beat up two policemen.

These policemen were apparenty operating under-cover and were speaking Arabic with each other, outside the gates of the yeshiva.

The policemen were reportedly mobbed by five or six students, including one who pepper sprayed a policeman, while the other officer was hit.

There are two elements to the story which make it newsworthy - Jews beating up "Arabs"; and yeshiva boys beating up "policemen".

All in one swoop.

There are also two angles which muddy those waters.

1. Yashlatz and the neighboring Mercaz Harav Yeshiva were the victims of a terrorist outrage on 6th March 2008. Eight students were murdered in the massacre and five more seriously injured.

During the massacre, the security forces were allerted - but they remained outside the building. The terrorist was shot dead by a student Yitzchak Dadon and off-duty soldier David Shapira

It would be legitimate for the boys to be particularly alert and sensitive to two "Arabs" loitering outside their yeshiva. It is understandable they would act first to protect themselves, even before or in parallel to calling the police (I don't knw if thy did or did not call 100).

2. The events happened on the same day that Evyatar Borovsky, 31, and father of five young children, was brutally stabbed to death by a Palestinian Arab at the Tapuah Junction.

Evyatar was a resident of the small town of Yitzhar, where several Yashlatz boys also live.

The shock and grief of that terrorist murder would have been very much on the minds of students from Yashlatz.

So, while I am certainly not justifying these boys taking the law into their own hands - it is more understandable that the Yashlatz students responded this way to the presence of two 'loitering Arabs' - potential ticking-bomb terrorists standing right outside their school gates - than the press made out.