Why Do Ethiopian Soldiers Go To Jail? 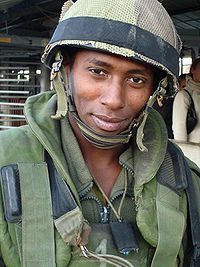 According to Army Radio this morning, 50% of Ethiopians who serve in the IDF, also serve some time in Army prison.

Indeed, Ethiopians make up fully 20% of all soldiers in military jails.

This is way above the proportion of Ethiopians in the population - there are 125,000 Ethiopians Jewish Israelis, who represent less than 2% of the total population.

According to Army Radio, the IDF has launched an enquiry into why the Ethiopian soldiers are ending up so disproportionately in army prisons.

It is interesting to compare this imbalance with the US experience; 70% of prisoners in the United States are non-whites, with blacks being totally disproportionate.

The Ethiopian population in Israel is underprivileged, but getting less so than they were a decade ago.

Drop-out rates from school are only slightly higher than the overall population (1.6% vs 1.5%); the proportion of Ethiopians going on to university is significantly lower than the rest of Israel (4.5% vs 6.6%).

Overall, the younger generation seems to be making progress in Israeli society, according to Army Radio, with service in the army higher than almost any other ethnic group.

It is notable that Israel appointed its first Ethiopian Ambassador, Beylanesh Zevadia, in 2012.

According to my reckoning, there will be three Ethiopian MK in the new Knesset.

I am curious why so many of these Ethionian IDF soldiers are getting into trouble...

Is it prejudice by the officers and military police?

Or is there some behavioural crisis going on??