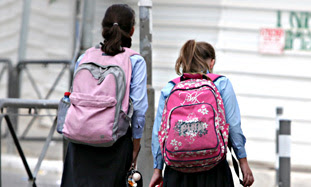 A major topic in recent weeks in New York (R.Weberman) and London (R.Padwa and R.Halpern) is now hitting Israel.
A leading story in today's Israeli media is about an attack upon a 5 year old girl in Kiryat Sefer.

The girl was apparently walking to kindergarten, and was grabbed and severely abused by a man, for a period of two hours.

The focus of the story and much of the commentary is that neither the parents, nor anyone else directly involved, was willing to report the crime to the authorities - or assist the police in their investigation.

This has opened up the topic of cover-ups of child abuse, particularly in some closed ultra-orthodox communities.

Some of the policies which increase risk of child abuse in such communities are:

1.  Taboo - the topic of child protection is not discussed and therefore adults, children and even community leaders and educators are ill-informed about it.

2. Naivety - although 'stranger danger' is applied to people outside of the community, there is an unrealistic assumption that anyone who 'looks like us' is kosher and above suspicion.

3. Family Life - ultra-orthodox families are encouraged to have very large families. Couples usually marry young and can have ten or twelve children. The mother is often required to manage the large and often under-funded household, while also working to provide for the family. This is a mission impossible, raising enormous logistical challenges. Therefore child supervision can be minimalistic at best, and neglectful at worst. Young children are routinely required to supervise their even younger siblings. In the case of the attack in Kiryat Sefer, the five year old girl was apparently taking herself to kindergarten.

In an environment of hefkerut, vulnerable children can represent easy pickings for perpetrators.

4. Halachik Concepts - attempts to impose halachik/hashkafic concepts on 21st Century child abuse cases results in considerable confusion. Perpetrators take advantage of this confusion in their communities.
Examples include: "Motsei Shem Rah", "Loshon Hora", "Mesira", rules of "eidus" (eg. women and children are not 'kosher witnesses'), the description of the aveira (eg. whether molestation is codified as an offense), the use of or reference to Batei Din (which have no jurisdiction or expertise in hearing criminal cases).

5. "Dealing with this internally" - instead of turning to the police and social services, there is a policy of trying to keep cases of child abuse an internal community issue. This is not to say the internal community resources 'do nothing'. They can refer victims and perpetrators to therapists who are willing to work illegally. They can apply pressure to make an alleged perpetrator leave the community (and move on to another one). They can apply communal pressure to make sure that the victim and his/her family do not expose the crime.

All these factors, together, result in communities where children are more vulnerable to abuse, without access to professional protection, intervention, and treatment; and where perpetrators can operate without punitive consequences or treatment.