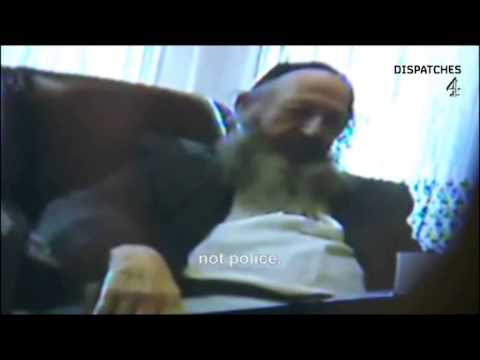 (Note: You Tube removed the video which was initially embedded here)

The documentary was made over a one year period, and visits the chareidi communities of London, Manchester & New York.

In London, an anonymous (to us) Chareidi rabbi is interviewed, who tells how a child was allegedly mollested in the community, who then told his parents, who went to the police. The community rabbinical leadership and many members subsequently intimidated and shunned the victim's family, charging them with "mesirah" (betrayal to the non-Jewish authorities).

Another alleged child abuse victim, now an adult (Moshe) is wired up by Channel Four, and then meets and secretly videos Rabbi Ephraim Padwa. Moshe tells Rav Padwa that he was sexually abused as a child, and Rav Padwa tells him, repeatedly, from several angles, not to report to the police.

The Channel Four interviewer then speaks with a community figure, Mrs Ita Symonds, an elderly lady who helps the needy, who is remarkably forthright and confident in defending the community policy of dealing with child abuse allegations as an internal matter. She adds that IF the community try and fail to 'deal with' a specific threat, they would then turn to the police.

The Channel Four team then moves up the M62 to Manchester, where Moshe is again wired up and meets with Dayan Osher Westheim, an Av Beit Din. Moshe tells Dayan Westheim that Moshe was sexually abused by someone now teaching i a school in Manchester.

Dayan Westheim appears more sophisticated that Rav Padwa, and says he is aware that he faces imprisonment if he explicitly tells a crime victim not to go to the police. He therefore more subtly dissuades Moshe, mainly by claiming the police will not act effectively (or at all)  if Moshe does report. In the discussion, Dayan Westheim claims that he is already investigating "the case" (without Moshe even identifying the man he's referring to) and if he finds the allegations are true, would remove the teacher from the school and send the perpetrator for therapy.

The program interviews a member of what sounds like a modesy patrol, or other gang of chareidi vigilantes who himself was raped as a child. In view of the ban on contacting the police, and the ineffectiveness of the rabbinical leadership, this gang has taken to beating up alledged child molesters in the community - around 15 of them over the years, he says.

"Dispatches" then heads to New York, to cover the infamous Weberman case, homing in on the Satmar community dinner to raise money for Weberman's defence. They interview a spokesman for the community who defends the community policy of rallying around the alleged perpetrator, but not around the victim.

The team then interviews Ben Hirsh of Survivors for Justice, who is working to promote the rights of child abuse victims in the Jewish community.

All in all, it is a dark day for the Jewish community that the non-Jewish media are the only party who are able  and willing to apply pressure on the chareidi community to finally drop their discredited policies of treating child abuse allegations as an "internal community issue".

On the other hand, hopefully this exposure will encourage child abuse victims and their families to come forward, putting their and the community's childrens' safety ahead of blind community obeisance.