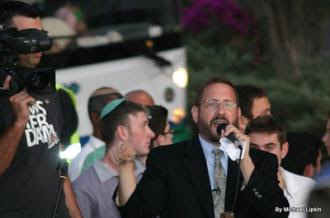 Local hero Rabbi Dov Lipman is going to be a Member of the Knesset!!

Dov has been a mover-and-shaker in Beit Shemesh since hitting the ground with Nefesh Be Nefesh from the USA eight years ago.

By profession, Dov is a Torah scholar and educator, including teaching for several years at Reishit Yeshiva in Beit Shemesh.

However, apparently teaching in the Beit Hamedrash was a little restricting for Dov's multifarious talents, and so he took to dynamically & energetically promoting the public interest in the streets of Beit Shemesh, even when this has evoked the wrath of some of the local Establishment and Leadership.

Dov took a lead activist role in lobbying the local politicians for municipal support to good causes - such as Lema'an Achai!

In 2011, when the mayor of Beit Shemesh, Moshe Abutbul, handed over the new school building of Orot Banot Modern Orthodox Girl's School, to an ultra-orthodox group for their school - Dov was the right guy, at the right time.

Dov mobilised the mainly-anglo supporters of Orot Banot, and then took the campaign, a parochial dispute over a neighborhood school, to unimagined national and even international prominence.

The 'scoop' of the spat-at and traumatized 8 year old girl Naamah Margolese, filmed by Channel 2, became an instant icon to those who fear ultra-orthodox extremists. And even for those who had never heard of utra-orthodox vs modern orthodox Jews.

The story reached CNN, BBC and all leading news media around the world.

Follow up stories of women who have suffered harassment in Beit Shemesh, and demonstrations against ultra-orthodox extremists, became the top nightly news-story in Israel for weeks.

Today, Orot Banot is a peaceful school, enjoying a quiet life in its new facility.

That is thanks to Rabbi Dov Lipman.

When Dov decided to run for national politics, initially with Rabbi Haim Amsalem's Amshalem Party, I was sceptical. I didn't see the common denominator between Dov Lipman and the Shas maverick break-away.

I admit, I was again sceptical.

At no.17 on a new list, led by Yair Lapid, a popuar journalist with no previous parliamentary experience - it looked like a non-starter for Dov to participate in national decision making.

In the huge surprise of this election, Yesh Atid has brought in 19 seats, making it the second largest party - and making Yair Lapid king-maker - and potentially the next Prime Minister of Israel.

And so our local hero, Rabbi Dov Lipman, becomes the first MK from Bet Shemesh in living memory (ever?), and the first US-born MK since Kach's Rabbi Meir Kahana in the 1980's.

And as a founder member of Yesh Atid, Dov's opinion and input into national decision making will be sought after and valued.

Dov's gamble has paid off - handsomely.

So, mazal-tov to Dov Lipman!!

This is a major step forward for all of Beit Shemesh, and for the anglo community throughout Israel.

I am proud of you Dov - yeshar koach!!