Is the Bet Shemesh Municipality Against Tzedaka? 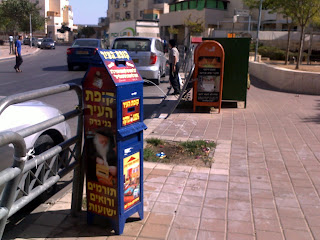 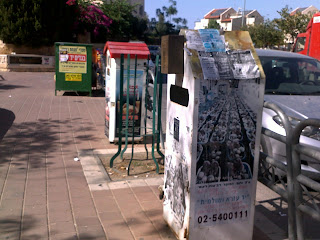 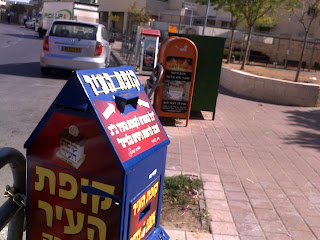 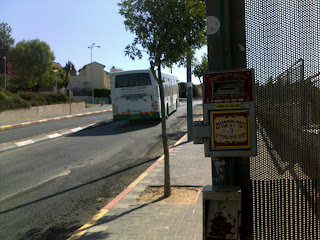 The same writer chides the Municipality for failing to (at least) warn the organization of their intent to remove the boxes.

For those who are unfamiliar with the phenomenon of installing charity boxes on bus stops, and on other public property, I will describe this.

About a decade ago, whoever is the PR guy for the Chasdei Naomi charity came up with the most brilliant marketing campaign.

Chasdei Naomi positioned half-adult-sized metal boxes, with attractive red 'roofs', outside stores on the pavement. These are designed to accept donations of food and money. They have the organizations adverts prominently displayed. These containers are chained to other public property (railings, lamp-posts etc) to ensure they cannot be easily removed.

Why was it such a brilliant gimmick?

Because Chasdei Naomi got store front advertising exposure, at close to zero cost (the cost of the metal container and the cost of a guy to chain it to something). And they stay out for year after year – promoting the brand, free of charge.

This national advertising campaign would have cost the charity millions of shekels.

The local authorities, and the store owners, turned a blind eye, and Chasdei Naomi became a household brand throughout . The campaign was cute, effective, and aided 's poor families.

However, other organizations soon hitched a ride on the same idea. Outside my local makolet (corner store) there's now five of these large metal containers, each from different charities, advertising their brand. All installed on public property, the pedestrian pavement, chained to the hand rail.

In parallel, these and other charities welded their smaller boxes to the bus stops, lamp posts, and other public properties.

This past week, someone in the Environmental Department of the decided to put a stop to this increasingly out-of-control phenomenon, and the municipal workers started to remove the welded boxes from the bus stops.

To the best of my knowledge the Municipality haven't yet started removing the larger containers from the shopping streets.

In my opinion, this whole phenomenon of out-sized containers and rugged iron welded boxes, is solely about free advertising, with a blatant disregard for municipal by-laws and simple derech eretz.

For the organisations who have joined this freebie bandwagon, it is simply absurd for them to tell the municipality that they should have warned the organizations.

These organizations put these adverts/containers up without permission nor payment, essentially stealing public property, and then have the chutzpa to complain the Municipality didn't inform/ask if it's ok to take them down.

It is even more outrageous to blame the Municipality for "families going hungry on Yom Kippur". (Which itself sounds absurd).

VERY little money is collected in these boxes, and even less food – their primary function is their free advertising value.

It is the slippery slope of zilzul (contempt) of the State and City laws and regulations, that can lead chas veshalom to individuals and whole organizations to stray even further on that path, into fraud (fictitious yeshiva students, etc), money laundering and outright corruption.

"Mitzva HaBaah BeAveira". Doing a good deed by sinful means. Or, in the vernacular, the ends justify the means.

Over the years, there has been a high price to pay, in such a hefker environment, for those who do chose to be lawful, straight, play by the rules, be considerate of the wider community, and have integrity.

Such individuals and organizations are playing on an uneven playing field. And the advantage has been with the lawless, not the lawful.

The Municipality has taken an important first step in enforcing lawfulness and communal responsibility - which is to benefit of all residents, rich and poor.