A Crow Stole My Cell Phone! 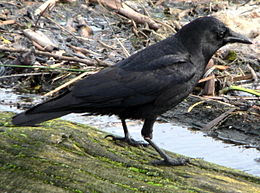 We've all heard of the classic line to the teacher: "The dog ate my homework".

Here's a variation on the theme.

My newly married 20 year old daughter Avital returned from a day trip by the Kinneret, and told me that her cell phone had been picked up and stolen away by a crow/raven! No more cellphone.

My son in law, Yair, reminded me that crows have a reputation for stealing bright shiny things – so the cell phone would have been a natural target for the bird.

Meantime, some desk-top research shows that a relative of the crow, the magpie indeed has a reputation for stealing shiny objects.

According to Wikipedia, the crow family (includes Crows, Ravens and Magpies) are exceptionally intelligent, "topping the bird IQ charts". Their brain cavity, pro rata, is the size of a human's.

"As a group, crows show remarkable examples of intelligence. Crows and ravens often score very highly on intelligence tests. Certain species top the avian IQ scale. Wild hooded crows in Israel have learned to use bread crumbs for bait-fishing [ed. Even the crows in Israel are smarter than the Goyish crows..]. Crows will engage in a kind of mid-air jousting, or air-"chicken" to establish pecking order. Crows have been found to engage in feats such as tool use, the ability to hide and store food across seasons, episodic-like memory, and the ability to use individual experience in predicting the behavior of environmental conspecifics."

And regarding Yair's observation that "crows steal shiny objects", here's a canned response from "Know"
http://www.knowmag.ca/knowitalls/index.php?id=17

Crows and ravens seem to be curious about all new things they see, whether they are shiny or not. Young birds will investigate objects they do not recognize. It might be something shiny, like a key, but it also might be a pine cone, a pebble, a bit of glass, or a blueberry. Unless the object tastes good, they will usually ignore it after awhile. Or, they might hide it in a cache. They don’t hide things in their nests, though. Crow expert Kevin McGowan has been peeking into crow nests for almost 20 years, and the only odd thing he’s ever seen has been a tennis ball."

Meantime, we're investigating the small print of the cell phone insurance, to see if theft by crows is covered...