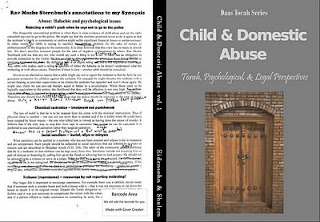 I am pleased to announce the publication of Rabbi Daniel Eidensohn's ground-breaking and authoratative book "Child & Domestic Abuse" - of which I am also a minor but proud contributor...

Volume One comprises of a series of 25 articles written by experts in abuse to provide a 3 dimensional understanding of this difficult issue.Thus the dynamics of psychology are connected with Jewish law (halacha) as well as the sociological and secular legal concerns.

The second volume is an extensive survey of Jewish Legal/Halachik Sources on this important, though still controversial topic.

You can order this right now from Amazon, $25 a pop per volume: http://astore.amazon.com/daator-20
or directly from the author at: https://www.createspace.com/3493035

The best way to give you a flavour of this remarkable and courageous book is to peruse the Table of Contents.

TABLE OF CONTENTS - Volume One

INTRODUCTION 1
Contribution of HaRav Moshe Sternbuch, shlita 1
Halachic first priority is to help victim  1
Spousal abuse - defined  2
Child sexual abuse – defined  3
Dealing with abuse is complex & requires experts 3
Blind outrage can be as destructive as silence 4
Yaakov & Dinah - outrage vs. restrained silence 4
Lack of evidence is not proof of innocence. 5
Not every sin is explicitly stated in Shulchan Aruch  5
All abuse is harmful – even if it is not a capital offense 6
Commonsense is a Torah obligation 6
Awareness of consequences of abuse is recent  7
Earliest responsa of child abuse are from 1850’s 11
Change results from knowledge of the harm of abuse 12
Betrayal by family & authorities is also abuse 12
Major paradigm shift in Orthodox community 13
Shameful to talk about abuse - but so is denying it. 14
Yashrus – Process of confronting reality 16
by Rabbi Meir Triebitz
From professional clinician to obligated Jew  24
by Dr. Baruch Shulem
A victim of Mondrowitz .31
by Rabbi Mutty Weiss
A survivor’s story  36
by Pinny
Not to be Silent.  45
by Rabbi Pinchus Lipschitz
A Psychiatrist describes the damage of abuse  48
By Nachum Klafter, M.D.
Mayo Clinic Report on Pedophilia (2007)     .67
Effects of abuse on children . 67
Number of victims per molester & amount of abuse  67
Treatment  67
Recidivism Rate  68
Different halachic frameworks for abuse   70
By Rav Yehuda Silman    70
PRACTICAL GUIDE OF W HAT TO DO    72
Guidelines of Orthodox Organizations   82
Association of Jewish Camp Operators - 2006    82
Suggested cover letter to parents   84
Things to Tell Your Child Before the Camp Season  85
Behavioral Standards of Camp Aguda  .86
Vaad harabbonim of Baltimore 2007    .88
Rabbinical Council of America - 2010     92
Agudath Israel & Torah U’Mesorah   .94
Ohel & Mandated Reporting   .98
Flatbush Shomrim - 2010    99
Torah u’Mesora: Behavioral standards for educators   101
Torah u’Mesora: Declaration of Rabbinical Board  102
SYNOPSIS – comments by HaRav Sternbuch   104
Need to investigate all rumors and charges of abuse  106
The first thing a real posek asks is, “What are the facts.”   106
Protection of society sometimes requires emergency laws  107
Circumstantial evidence & testimony of women & children   107
Mesira (informing) the secular authorities  108
Mandatory governmental reporting   108
Aiva - causing hatred to Jews - is reason to report abuse   109
Consulting rabbi before calling social services or police  109
Rejecting a rabbi’s psak when he says not to go to the police 110
Chemical castration - treatment not punishment  111
Social sanctions - burial, aliya or minyan. 111
Teshuva (repentance) - encourage by not reporting molesting? 111
Abortion in the case of rape and incest  112
Background checking - Database and fingerprinting 112
Honoring Parents who are abusive. 113
By Benzion Sorotzkin Psy.D.
Community responsibility to confront abusers 132
By Dr. Asher Lipner.
Newspapers, Media Sources, & Lashon Horah  168
by Rabbi Yair Hoffman
W ife abuse: Thinking outside the box.. 188
by Baruch Shulem Ph.D.
Jewish Perspectives on Domestic Abuse 191
By Rabbi Raffi Bilek, M.S.W.
Domestic Abuse: The Dark Side of Marriage.  200
By Lisa Twerski, LSCW
Jewish Calculus of Suffering:Stop sin or suffering?  207
by Daniel Eidensohn, Ph.D.
Excessive fear of sinning paralyzes the will to do good .209
By Daniel Eidensohn, Ph.D.
G-d’s reasons for rape and abuse  214
By Daniel Eidensohn, Ph.D.
How can we prevent abuse?   217
By Bracha Goetz
Watering the W eeds – Changing the system   .220
by Rabbi Micha Berger
Abuse in Israel: Legislation & court practice     233
by Judge Philip Marcus
American Legal system.     237
by Shlomo Singer, esq.
Thoughts of a Jewish lawyer     253
By Elliot B. Pasik, esq.
Charismatic personality & sexual abuse    257
Paul Shaviv, M.A.
Chosen People & Abuse.   .270
By Rabbi Pinchos Yehoshua HaCohain
Why is that man taking such an interest in my child??  291
By David Morris
Orthodoxy’s Failure to Confront Sexual Misbehavior    .295
By Alison Feit, Ph.D.
Kiruv can be dangerous to marriage    311
Daniel Eidensohn Ph.D.
Abused wife’s salvation: W aiting for a traffic light     313
Daniel Eidensohn, Ph.D. retelling a story of Dr. Naomi Remen
child abuse Rabbi Daniel Eidensohn