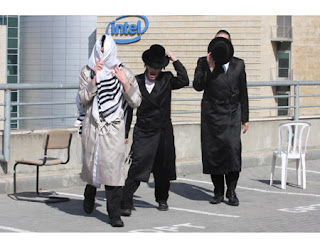 For the second Shabbat running, a large crowd demonstrated against the desecration of Shabbat at Intel, which employs some two dozen Jewish workers in on the Sabbath.

There are mutual allegations of violence; the police have arrested demonstrators for damaging property; whereas the demonstration's organizers, the Eida Chareidit, have accused the police of wanton violence. The alleged use of illegal means by the demonstrators has evoked stinging criticism by the secular press, and embarrassment amongst some erstwhile chareidi supporters.

There is apparently nothing new about Intel's practice of employing Jews on Shabbat (Intel claim to have been doing this, with the relevant government approvals, for over ten years), so the timing of the row has attracted some criticism; there are those who accuse the demonstrators of seeking out artificial 'causes' to rally their forces for political motives (the chareidi candidate lost the last Jerusalem election for mayor), rather than because of any significant changes on the ground at Intel.

People have a democratic right to demonstrate (subject to police authorization etc); it is also accepted that many demonstrations (ever been to a demo?!) cross into illegal actions, and there are accepted consequences to this (legal process, bad PR, etc). And rallying the masses, even on an artificial pretext, is part of the democratic process in every free country.

And yes, demonstrations do generate strong emotions from supporters and opponents.

If there were no response, no-one would bother to demonstrate!

So, the demonstrators have every right to demonstrate against Intel for Shabbat desecration.

Whether this demonstration against Intel is smart, is the right thing to do, is good-for-the-Jews, however, is an entirely different matter.

Intel , is the largest private employer in the country today - with 6,600 employees in its development and production facilities in , , Kiryat Gat, Petach Tikva, Yakum and Yokneam. Intel began operating in in 1974 with five employees. Today export sales from Intel are around $1.6 Billion. Intel therefore provides parnassah (livelihood) directly for 6600 families and for thousands of others who are suppliers/service providers to Intel.

The + Intel partnership is a flagship of the Israeli high-tec sector.

My main concern against these demonstrations is that they may frighten Intel and other big investors & job-providers away from , and even away from . Govermnent, municipalities and the local business sector fought hard to bring Intel to (there are many competitive locations around the world) and to successfully build up their presence here.

If there could be a way to eradicate Shabbat desecration (such as by using non-Jewish labour), while retaining good relations with "the hand that feeds us" then this would be far 'smarter' for klal yisrael than raucus high-profile public demonstrations- whatever their political agenda.