Why "The Burka Lady" Is Going To Prison 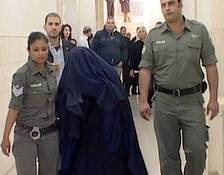 The woman from Ramat Bet Shemesh who found notoriety for wearing a "burka" – head to foot black cloth associated with Islamic fundamentalists, rather than regular orthodox Jewish women's attire – has now been found guilty of serial child abuse.

The woman and her husband were found guilty of charges of violence and other abuse against six of their twelve children. The gory details include that the children were sometimes locked in a hut outside their house, inside which acts of incest then took place.

Indeed it seems to me that the timing of the publicity of this lady's Buka attire in the press and media in and internationally – and her arrest on child abuse charges just a few weeks afterwards - was not coincidental.

Only when her community in Ramat Bet Shemesh Bet, and the secular authorities, such as the social services and police, were united in their embarrassment about the "Talibanit", were the conditions finally ripe for the lady to be arrested and brought to justice…. Without creating the inflamed rioting in and Bet Shemesh which have erupted when child abuse or other charges were pressed against members of the ultra-orthodox community.

It is tragic that it took YEARS for the various "interests" of the parties involved, to finally coincide with the best interests and protection of these six unspeakably abused kids.