The First Human Right: To Live 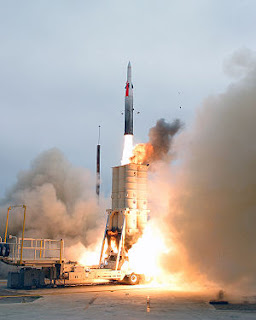 (The week of Tisha B'Av returns us to the destruction of the two Temples, the tragic exiles & massacres, and the terrifying prospect of further disasters visited upon the Jewish people, chas veshalom....)

The report this Friday that the latest tests of the Israeli Arrow Missile Defence System, which took place in the , failed – is beyond just being worrying. The Arrow was specifically developed, as a joint + joint venture, to counter the ballistic missile threat, primarily from Without an effective anti-ballistic missile defence umbrella, we in are denuded.

That is to say, me and my family, my community and over a third of the world's Jews, are now within ballistic missile range of . This conventional and severe threat has been present for several years - and it is due to increase to Armegedon proportions with the development of nuclear weapons by , and the Iranian regime's stated intent to "wipe the Zionist entity off the map".

The development of a nuclear bomb by is reportedly imminent - measured in months; and the mating of this technology into a ballistic missile is perilously close to fruition. Let's face it, that combined nuclear warhead plus ballistic missile technology, is now over half-a-century old. As the expression goes, hardly rocket science…

Any agendas for anti-abuse, anti-corruption and working for Civil Justice – pale in comparison with this.

The Universal Declaration of Human Rights (http://www.un.org/en/documents/udhr/), adopted by the United Nations in 1948 states:

A reliance upon international diplomacy to ensure the State of Israel's right to life, is utter madness – there is no rational basis that such diplomacy will, or even can, succeed in the current environment. Both and oppose appropriate levels of diplomatic pressure – and the and other western Governments lack the will or capability to force to drop its nuclear program.

So our pragmatic options for survival, in my opinion, are limited to just one. The only practical plan for ensuring the survival of the Jewish (and Palestinian, by the way) population of , is for to launch a pre-emptive strike on . The same way we did against the Arabs in 1967 (Six Day War), and against the Iraqi Nuclear Reactor in Osirak in 1981.

It is clear that this entails risk – and unknowns. Certainly, unknowns to Joe-average, like me – those of us who rely on publicly available information. But beyond these there also Unknowables, even to the Defence Establishment and to the politicians who control it. Our allies have made statements focusing on these risks, including to the itself, of launching a pre-emptive attack, most recently "A senior defense official has warned that an Israeli strike on could have profoundly destabilizing consequences, and would directly affect US interests." (Jpost, )

However, post-Churban, post-Holocaust, post-Hiroshima, and post-Iranian Revolution – for President Mahmoud Ahmadinejad's regime to be nuclear armed will be an assured, immediate threat to all of us in . Therefore our most primary Human Right must now be asserted, without any further delay. In spite of any (unknowable) risks to the and even to ourselves.