Why the decline in stabbing terror attacks? 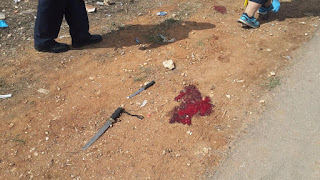 (Notwithstanding today's report about an explosion on a bus in Jerusalem...).

After 6 months of almost daily terror attacks, the pace of mayhem and murder has noticeably slowed.

Since October, 2015, Arab terrorists have attacked Israelis, generally acting without organizational logistics, but rather solo individuals or, at most, small groups of friends, using knives, cars and sometime guns, resulting in a tragic death toll of 36 Israelis.

In the past month and a half, however, these horrors somewhat and thankfully abated.

Of course, the future is uncertain, and who knows what tomorrow may hold, heaven forbid. But the recent past is incontrovertible fact.

According to the IDF, March saw an overall number of 6 terrorism incidents (including shootings, stabbings, and vehicle rammings), compared to 56 in February, 45 in January, and 40 in December.

April appears to have followed, so far, the same pattern of dramatically decreased number of terror attacks.

I haven't seen any commentator who has come up with a credible narrative explaining why this may be happening.

In light of the dearth of credible explanations for this among commentators, I posit my own theory about a possible contributing factor.

Perhaps there is a link to the infamous incident in March when an Israeli soldier shot dead an apparently prone and incapacitated terrorist in Hebron.

On the one hand, this event sparked off an enormous storm in Israel, with outspoken opinions about whether the soldier had acted outrageously or heroically, or somewhere in between.

The Palestinians and their supporters, such as the producers & publishers of the curiously sound-trackless and cropped video, Betzalem, milked the occasion for everything they could, demonising the IDF and beatifying the terrorist.

The macabre video was repeatedly shown on Palestinian and international media. Finally, they had ‘clear evidence’, that the IDF was truly carrying out extrajudicial executions, just as the Palestinian leadership had been consistently claiming.

My suggestion is that, unwittingly, the Palestinians succeeded in dampening the enthusiasm in the Palestinian streets for taking on more individual acts of terror.

For half a year, the Palestinian leadership had routinely and baselessly accused the IDF of "field executions".

With the aid of this video, blasted from every TV station and throughout social media, perhaps they finally convinced their own people (who surely know even better than us that their leadership is composed of compulsive and pathological liars) that the claim was actually true.

I suggest this may be what has led would-be terrorists to think twice, viewing themselves as that guy lying prone on the Hebron street, and then getting shot in the head.