Passover Sacrifice to be Reenacted Facing Temple Mount Next Week 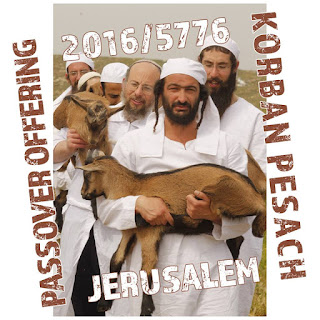 The public reenactment of the Passover Sacrifice, which has become a popular spring-time event these past few years, will be getting closer to the actual site of the Temple Mount next week. In addition, the organizers are offering a (k'zayit-sized) piece of the Paschal Sacrifice in order to fulfill the biblical commandment, should that become a possibility.

This year's reenactment may prove to be an even more festive event than ever as many new participants are planning to arrive from all parts of the country in order to take part in this free but priceless opportunity!

The past Paschal Reenactments were held in a school courtyard which became more cramped each year due to the growing popularity of the important event. For this reason the organizers decided to move the event this year to the more spacious location of Mitzpeh Beit Orot, between Mount Scopus and the Mount of Olives, near Emek Tzurim, which faces Judaism's holiest and most relevant to the occasion site, the Temple Mount.

The reenactment will take place next Monday, just four days before the prescribed time of the Paschal Offering. It is the intent of the event's initiators to offer a taste of this exciting ancient Jewish experience, with its smells, sounds, and colors that have been lost to us these 2000 years, and to thus arouse a longing to renew this Temple ritual in our day. It is also meant to demonstrate that this Paschal commandment, so essential to the Passover celebration, can be a totally realistic goal, which we can in fact fulfill at its prescribed time, on the eve of Passover.

Rabbis and public figures will be attending. Among them is the Chief Rabbi of Jerusalem, Rabbi Aryeh Shtern, who at last year's reenactment expressed his great amazement at the public's desire to reinstate the Paschal Sacrifice, which in his words was, "much greater than he expected." Also attending will be current members of Knesset and the Deputy Mayor of Jerusalem, Dov Kalmanovitch.

This ancient ritual is being revived this year with the help of the cutting-edge HeadStart Campaign Website under the name Passover Reenactment, which is proving to finance the event through the public's support. Just in its first week, the campaign became listed as one of the website's most popular causes, and it is enjoying a wave of pledged support that has covered about two thirds of the project's goal.

You can see this by clicking the following link:
http://www.headstart.co.il/search.aspx?keyword=Passove+Reenactment

Among the prizes offered there as appreciative gestures, is a small piece of the roasted lamb from the reenactment. But the most popular prize chosen is a k'zayit sized piece of the actual Paschal Sacrifice promised to be offered for the donor, on the Temple Mount, at the prescribed time this year, should the authorities make allowance for it. For this purpose several flocks of sheep without blemishes have been reserved by the organizers.

This year the event will begin with a rabbinical round table debate about how much we should strive in our day to renew the Temple service with its sacrifices, if at all.

Following will be Torah classes given by rabbis and rashei yeshivot, including Rabbis Menachem Borstein, Uri Shreki, Menachem Makover, Benayahu Bruner, and Rabbi Yitzhak Yavetz , graduate of the Ponivitch Yeshiva.

During all hours of the panel discussions and Torah lessons there will be children's activities such as craft tables, sheep petting, and an inflatable play-ground available.

Finally, there will be a procession with the sheep simulating the Passover pilgrimage to the Temple Mount as in the time of the Mikdash culminating in an exact reenactment of the Paschal Sacrifice, including the slaughtering of a lamb and the ritual offering of its blood and fats on a model altar by actual Cohanim dressed in authentic priestly garments. The performer, Mordechai Yitzhar and his band will be on hand to sing the Hallel accompanied by silver trumpets, just as was the practice in the days of the Temple.

Details of the event listed here:

2pm: Round table panel debates (in the Bet Medrash of Beit Orot Yeshiva right next to the Mitzpeh)

4:40pm: Sheep procession to the Mitzpeh

Transportation available to and from Ammunition Hill during all hours of the event starting from 1:30pm

To get your k'zayit of roasted paschal lamb or an actual Korban Pesach voucher, click here: http://www.headstart.co.il/search.aspx?keyword=Passove+Reenactment

Other Rabbis and officials attending besides the ones mentioned above: