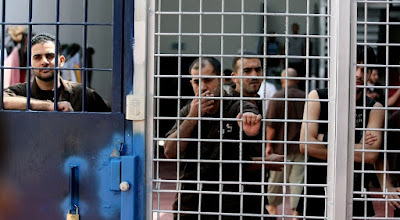 I gave a guy a hitch/tremp the other day. It transpired he is closely involved in the Duma case (the arson which killed three members of the Dawabsheh family).

During the ride, he told me about an astounding aspect of the case which was unfamiliar to me, and probably to you too, as the only media outlet which has agreed to publish the story was Haaretz (in their Premium section).

You will recall that on 2nd August, 2015, the Israeli Cabinet approved introducing "extraordinary measures" in interrogating suspects of Jewish terror.

My passenger told me about an additional level of "extraordinary measures" which have recently been used for interrogating and extracting confessions from Jewish suspects, which sound like a B Movie script.

There is a disused British Prison in Acco (not the public museum, but a different building near the current day police station) which was converted by the police, for the purpose of extracting confessions from "Jewish terror" suspects,  into a fully functioning mock prison.

All the people in the prison, the guards, the prison service officers, and the prisoners, both Jews and Arabs, were all undercover policemen, acting in these roles.

The only 'real' characters were the Jewish suspects. These suspects were held totally separately from each other, and report similar treatment.

The cases of two of the suspects is recounted in detail in the Haaretz article.

25 year old Yitzhar Klimkovitz was arrested on suspicion of participating in the Duma arson and was later released without any charges.

Shortly after his arrest, Klimkovitz found himself in this fake Acco prison, in the same cell together with "dangerous long term prisoners", including murderers, gang members, drug dealers etc. Most of the prisoners were Arabs.

During his incarceration, he was a witness a "stabbing murder" of an Arab prisoner by a Jewish prisoner armed with a knife. There was blood everywhere, a dead body, a hasty washing off of the knife to remove finger prints, and general panic among the prisoners. The prison authorities, batons swinging, launched an investigation.

The prisoners then turned on Klimkovitz, knowing he was a witness to the murder, and a new inmate, and they accused him of being an informer or undercover cop. They beat him, including kicking him in his testicles and threatened his life.

In order to 'clear himself' of the allegation and violent consequences of being an informer (the lowest class of prisoner and open game for retaliation), he was told he must tell them what crimes he had committed, so that his identity as a genuine criminal could be verified by their friends outside, and so that the prisoners would have leverage to use against him to ensure his silence. This would avoid him being labeled and punished/silenced as an informer.

Klimkovitz told them he had been previously imprisoned in "Rimonim, Section 16" but didn't admit to any crimes and indeed Klimkovitz did, in frustration, eventually 'admit' to being a police informer!

A different suspect, "B", whose name is under a gag order as he is a minor, is 17 years old.

He was also taken to the same mock prison, and similar tactics were used to extract a confession. This time the "crime" he witnessed was drugs related and he was similarly threatened and accused of being an informer or police plant.

Under this pressure B said he had been involved in various anti-Arab activities, including arson and beating up an Arab in Jerusalem. He also said he had once assaulted a police officer in an evacuation of the Ramat Migron outpost. There was nothing about Duma.

The youth is now facing charges for these other alleged offenses, based on the 'confession' extracted in the prison scam.

Another youth, "A", who is currently facing trial as an accomplice to the Duma arson, was also subjected to the Acco fake prison. Like B, he also "admitted" to various crimes to his fellow prisoners under threats, but nothing about Duma.

Placing a minor into a prison of adults is against the law; however, the prosecution are arguing that it wasn't a real prison, so that law didn't apply. The defence is arguing that subjectively, the boys believed they were in a real prison, with real prisoner and real threats - therefore this constituted illegal incarceration and unlawful pressure.

The main suspect, Amiram Ben Uliel, who is charged with murdering the Dawabsheh family, during his incarceration in Acco "admitted" to have killed a goat owned by an Arab as well as beating up another Arab (who was hospitalised).  He did not relate at all to Duma.

This story of the Acco fake prison has been told to the main media outlets in Israel, but none of them were willing to publish, apparently due to concerns of breaking censorship regulations. Chaim Levinson of Haaretz was the only main stream journalist willing to report it.

Which is why you probably don't know the Hollywood-style story of the Acco fake prison and the dubious confessions which were extracted under duress there.