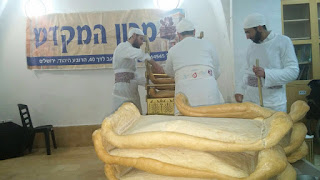 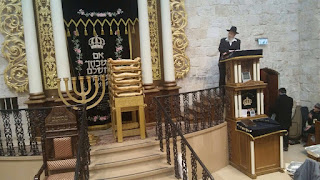 Raphael Morris's interests in Temple Mount and in Baking (he's a professional baker) combined recently, in a Temple Institute project to re-enact the preparation and ceremony of the "show bread" (Lechem Hapanim) - perhaps for the first time since the destruction of the Temple 2000 years ago.

Raphael explained that The Temple Institute decided to dress some Cohanim (descendants from the Priests) in the reconstructed Priestly garments which the Institute has painstakingly made as closely as possible to the original Priestly Garments of the Tabernacle and Temple.

Rav Baruch Kahana, The Institute's rabbinical authority advised them that rather than do this as an isolated event, they should have the Cohanim wearing these garments as a part of a bigger event. As I understand it, similarly to the rules concerning taking a Sefer Torah out of the Ark, this should only be done for a purpose, such as to read it, rather than out of curiosity.

The Institute decided that an appropriate ceremony to re-enact, with the Cohanim wearing their priestly garments, was the ceremony of the showbreads.

In the time of the Tabernacle and Temple, the showbread was baked once a week, and the Cohanim ceremonially replaced the old bread on the Table (shulchan) with the new bread.

The Institute decided to hold a reenactment of the Showbread ceremony, at the Old City Community Center, on Tu B'Shvat.

To the best of their knowledge, this has not been done since the Temple was destroyed.

A member of the Temple Institute team of experts researched what is known about the preparation of the showbread and guided the volunteers how to practically prepare the bread.

In the Tabernacle, there were 12 show bread loaves, replacing the week-old 12 breads. So for a full reconstruction reconstruction, 24 loaves were required.

According to the research, each showbread loaf was made from approx 4kg of coarse wheat flour, resulting in some 6kg of dough. This, multiplied by 24, equals 144 kg of dough.

Furthermore, the loaves themselves were large, some 60cm long by 40cm wide, and 8cm thick, with 'walls' of 10 cm at the two ends, to make a "chet" shape.

The Institute decided that the showbread should be kneaded for 40 minutes and baked for 40 minutes (considerably longer than the 18 minutes for matzo). In a one-loaf capacity kneading machine and oven, this would therefore require 16 hours of continuous production.

Raphael obtained the permission of the owner of the bakery where he works in Hod Hasharon to use their commercial oven, with capacity for six loaves. And the Institute rented a commercial scale kneading machine.

The Institute was concerned that large quantities of 'showbread' would be left to waste, and so they decided to cut back the project to 12 loaves, enough for a full Table.

Raphael took over the bakery for an all-night session, working solo, and he kneaded and baked the loaves. He used standard aluminum pans as a mold for the 'walls' of the breads.

There was no way to check the texture of the inside of the bread, so Raphael worked from instinct.
They came out crusty on the outside and fluffy inside.

In the morning, he transported the loaves by car to the Old City. The Institute staff were excited to receive the loaves and particularly surprised with how physically heavy and awkward the showbreads were to carry. The ceremony would require strong and dexterous Cohanim. 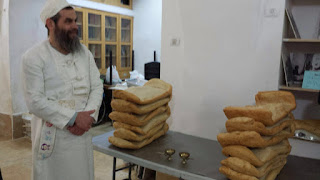 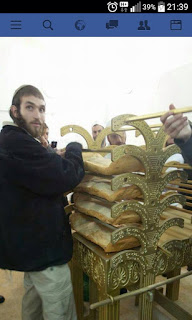 Tu Beshvat was forecast to be snowy in Jerusalem, and yet around 60-70 people enthusiastically attended the spectacular event. 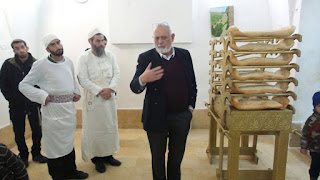 Six Cohanim were dressed in the Priestly garments and conducted the ceremony of the Showbreads.

Everyone who attended was welcome to eat the bread afterwards, together with chumus and salads.

By the end of the evening, all of the 'Showbread' had been eaten.

This was by all accounts a most impressive practice exercise, and we all look forward to seeing and participating in the real Lechem Hapanim ceremony in the Third Temple!