It doesn't sound too exotic or adventurous - I took a day off this week to tour around Tel Aviv and had a surprisingly varied and enjoyable time....

When I last went there (over 20 years ago!) it was called the Diaspora Museum, now the Museum of the Jewish People.

It is located at the Tel Aviv University campus and, with a little help from Waze, was fairly easy to find.

The ground floor has a nice looking cafe (I don't know if it is kosher - didn't go in) and an exhibition about the United Colours of Judaica - which was temporarily out of commission due to maintenance. Otherwise auditoriums, which were hosting conferences and talks. Not much doing.

The second floor is the main exhibition area, and is grouped according to 'theme' rather than strictly chronological. There are few genuine artifacts but the exhibition was extensive and varied.

The Mazal Ubracha temporary exhibition was potentially jarring for some orthodox Jews, and perhaps also for very liberal Jews too, as it focused on Jewish superstition.

Jewish superstition certainly exists, and it is a topic well worth examining. Sensitivity & considerable knowledge is required to differentiate native/naive superstition from 'authentic' Jewish practice. I guess that was what the exhibit organizers tried to do, with questionable success.

In fairness, there was a warning posted that anyone who might find the exhibits offensive, should miss out the Mazal Ubracha exhibit.

The core exhibition was  excellent, including Culture, Community, Family and a Memorial Section for the Holocaust.

There is a reasonable overview of the various sections here:http://www.bh.org.il/exhibitions/core-exhibition/

Overall, the Beit Hatfutzot Museum was well worth the couple of hours we spent there - we could even have enjoyed another half hour or so, had it not been for closing time.

2. Tayelet - we later walked up the coastal promenade ("tayelet") from the hotel area on Hayarkon Street to Jaffa - about 45 minutes (up to however long one wants to meander and enjoy the seaside).

The promenade was popular without being packed, and clean & attractive. There is an option to pick up a bicycle for short term rent. You then drop the bike off at one of many pick-up/drop off locations.

The Tel Aviv Municipality is to be commended for the attractive design and impeccable upkeep of the promenade. As indeed are the locals, who clearly do their part to keep their promenade clean and beautiful.

3. Three Outdoor Markets: We walked through (and along a route between) three street markets. 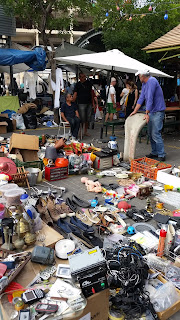 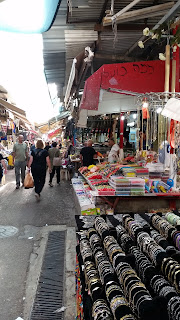 The Flea Market - Jaffa: Known in Hebrew as "Shuk Hapishpushim - שוק הפשפשים"
We started at the clock tour in Jaffa and explored several streets known collectively as the Flea Market. We discovered a range of products and retail styles.

There are bona fide antique shops - selling high quality antiques, mainly from Europe. Finding a bargain, such as a genuine Rembrandt in a pile of dusty pictures, is going to be tough, as the shop keepers seem pretty professional.

There are also shops selling second hand stuff - most of the stuff looked like other people's junk. If you have a talent for renovating used furniture, then it would be a good hunting ground; or specific narrow collecting habits - such as LP records of Yoram Gaon's early years - then you can spend happy hours searching for your specific treasures.

There are also commercial used, reproduction and tourist items - the buyer should be wary, as much on offer is clearly modern, or thinly disguised reproductions of old items.

The highlight of this visit to the Jaffa flea market, for me, was the "Only In Israel" street minyan for mincha. 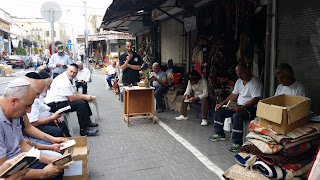 I guess there were about 50-100 table top stands in the "midrachov" pedestrian precinct, spread along two or three streets.

Most of the salespeople appear to be the artisans, selling their own work.

Pottery, woodwork, jewelry, paintings, glasswork...the whole gamut of lowish cost crafts products were on sale. I didn't spot anything "wow!" to spontaneously buy. So I reckon it's a good idea to go if you're looking for something specific - such as a birthday present - which I wasn't.

The Nachalat Binyamin Market is only open a couple of days a week; we visited on a Tuesday.

3. A street away from Nachalat Binyamin is the Carmel Market.

There are also stands selling clothes, nick-nacks, and some tourist items.

The market was apparently quieter than usual, probably due to the stabbings around the country, putting people off coming out.

4. Having finished up the three markets, we explored Neve Tzedek.

This is located in an area between Jaffa and South Tel Aviv. It was the first neighborhood built outside of Jaffa, became very popular with local leadership, such as politicians and writers.
It fell out of favour and became run-down for many years.

Today, it has been widely renovated and has become very "in" with the arty crowd and a tourist attraction. There are art galleries, cafes and restaurants.

Some is still pre-development, and run-down.

Rabbi Avraham Yizthak Kook lived in this area while he was Chief Rabbi of Jaffa, for about 11 years. 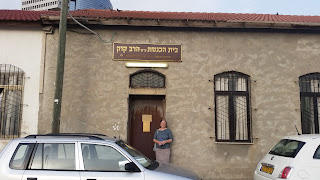 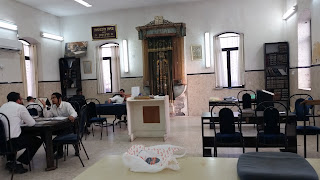 We found Rav Kook's small shul/beit medrash with a small active kolel, mainly sephardi chareidi.
They were eager to enlist our support (not financial) as they would like to attract Rav Kookniks to strengthen the institution and help with community outreach. 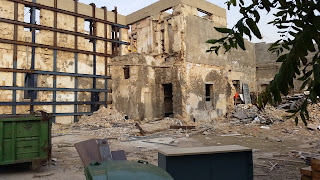 We were also shown the building which had housed a factory which Rav Kook established to provide employment. The factory was for producing metal safes, which were used by banks and others in pre-state Palestine.

The buildings were currently being renovated and new residential blocks built around them.

The avreichim/students told us that the apartments being built would be well beyond the ability of any avreich to buy.

Conclusion: our whirlwind self-managed tour of Tel Aviv was fascinating and varied; most of the places we visited were for the first time - and highly worthwhile.

Aside for the Beit Hatfutsot visit, we went everywhere on foot. I was rather eager to try the municipal bicycle programme, which would have saved quite a lot of walking time - I guess I'll try that on a future visit.