This Close is Too Close 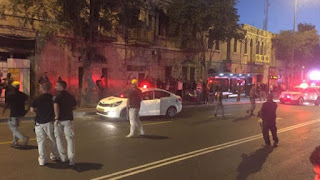 It is difficult for non-Israelis to grasp the incredible proximity of "News" in Israel, to our personal day to day lives.

In other countries, when (or if) they switch on the evening's news broadcast, it more resembles yet another soap, about might-as-well-be fictitious, or far away, places and people - than anything about their world, their lives.

Here in Israel, the daily news is about us, our families, neighbours and friends.

The current crazy situation in our streets, with daily stabbing, driving-down and other terror attacks upon random citizens effects each of us, and their circle, in the most palpable way.

In my case, I bring the following examples:

1. Last week (while I was abroad) my visiting parents took a selection of my kids out to a restaurant near the central bus station in Jerusalem.

Part way through the meal, there was shouting and a disturbance from outside. Customers in the restaurant started shouting, in clear panic. The restaurateur hurriedly invited people from the street into the restaurant, and then rolled down the metal shutters, to protect the people inside.

My daughter in law, a baby in one arm, drew her pistol shaped pepper-gas spray. My mum nearly keeled over.

There was shooting outside. People running. Sirens.

After a period of time, the owner rolled up the shutters, and the people quickly left to go home.

A 50-year-old woman had been stabbed boarding a bus by a terrorist, who had then been eliminated by the security forces. (Full story here).

The restaurant owner told my family that many other customers had ordered food, but due to the attack had not stayed to eat. He offered my family the large amount of left-over meals.

The kids were only too happy to oblige; probably enough delicious food for a week.

2. My daughter Shira lives with her family in Negahot, a small village between Hebron and Kireat Gat.

Actually, she lives in a satellite settlement, "The Bustan", about a kilometer away from the main village. There are just five families there.

Two weeks ago, they were woken-up by a knocking on their door. It was a soldier, come to tell them to taken cover, as a suspected terrorist had been spotted by a patrol just outside their neighbors house.
Within minutes, shots rang out. The man was shot dead. He was armed with a knife and (according to my son in law) also a gun.

Furthermore, when I visited Shira and her family at their home yesterday, ther had just been another 'incident'. At the bottom of their hill, a soldier had been stabbed by a terrorist. The terrorist was shot dead. The soldier was described as 'lightly hurt'.

3. About three months ago, as I posted here, my son Raphael, who lives near Shilo, Shomron, was in a vehicle which arrived first at the site of a drive-by shooting attack. Raphael helped get the injured out of the car, including 25 year old Malachi Rosenfeld.

I am not unusual - every family can tell similar stories of near-misses, and personal tragedies.

These crazy and murderous terrorists are a very real threat to every Israeli and their families.