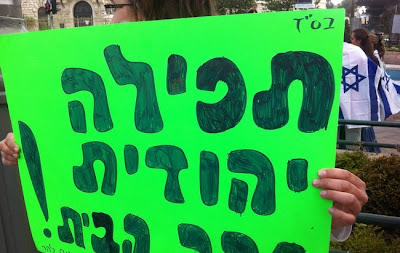 Benjamin Netanyahu has publicly and internationally stated and re-stated that Israel's policy is to "uphold the status quo on Temple Mount".

As the Arabs are currently inciting hatred and terrorism against Jews, spilling innocent blood, using Israel's purported actions on Temple Mount as the pretext - it makes sense for Netanyahu to expose the fallacy & lies of the Palestinian narrative.

It was pragmatic for Netanyahu to explain: "Muslims pray on Temple Mount; non-Muslims visit Temple Mount."

However, in so doing Netanyau has missed an opportunity to expose the absurd and outrageous situation that is called the "status quo".

The current practice of outlawing Jews and Christians from praying at this most holy site - and giving that right exclusively to Muslims - is blatant discrimination.

And the arrest of Jewish "visitors" for crimes such as mumbling psalms, or mouthing prayers, is simply absurd.

This absurdity has been publicised by "Chozrim Lehar" ("Returning to the Mount") an NPO run by Raphael Morris (my lad), by brazenly offering anyone 2000 NIS if they are arrested for praying on Temple Mount.

This offer has been widely publicised in the Israeli media, most recently in this interview: http://www.inn.co.il/News/News.aspx/308898

Whereas I understand Netanyahu's need for pragmatism, to calm the current wave of terror, it is important that the Jewish narrative is also true and consistent.

The status quo is not acceptable, even if it may be pragmatic.