Help tell the stories of the forgotten Jewish refugees of Ukraine

Jews have always been scapegoats during times of trouble and the current Ukrainian crisis is no different.

While anti-Semitism in France and other western European nations generates the headlines, the Jews of Ukraine are facing the the greatest humanitarian catastrophe in the Jewish world in 2015. Thousands of Jews have been made homeless by the military conflict that has decimated their communities in Donetsk and Luhansk while both sides of the conflict bandy about casual accusations of anti-Semitism at their enemies for propaganda purposes, falsely turning the issue into a Jewish one. 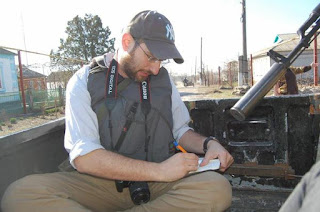 However, their stories are greatly at risk of being forgotten.

As the award winning Diaspora Affairs (Jewish World) Correspondent at the Jerusalem Post I have been traveling back and forth to Ukraine on a regular basis since the outbreak of the Maidan revolution, collecting testimonies from participants, activists and refugees. While reported from the barricades in Kiev, separatist controlled Donetsk and the refugee camp in Zhitomir, among other places, I have recorded dozens of hours of interviews which I hope to use as the basis of a book on the crisis’ effects on Ukrainian Jewry.

The problem is that, unlike in western Europe, the Jews of Ukraine are not suffering as a direct result of anti-Semitism but as the result of a larger, non-Jewish conflict- although both sides do bandy about accusations of Judeophobia in order to discredit their foes. This lack of a narrative of Jew hatred has caused many in the Jewish and Israeli media to largely ignore the Jewish dimension to the refugee crisis and the disintegration of Jewish communities like those of the separatist strongholds of Donetsk and Luhansk. Jews have been thrust into the middle of a conflict that has nothing to do with them. 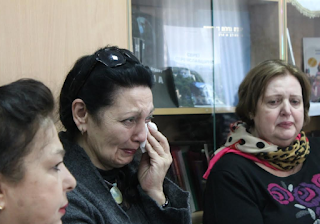 Between over the past year around three quarters of Donetsk’s pre-war Jewish population of 10-11,000 Jews have become internally displaced persons, ending up in refugee camps in Zhitomir and Shpola and straining the already precarious finances of communities in Dnepropetrovsk and Kiev.

As Israeli journalist Zvika Klein put it, in Israel “you don’t see a lot of coverage of any sort of [Diaspora] Jews unless it has to do with anti-Semitism or a big wave of aliyah.”

The stories of suffering and courage coming from Ukraine are amazing.

Chatting with an elderly refugee in the contested port city of Mariupol, I heard how he was less concerned with his own safety but rather for his Kurdish son-in-law and his grandson Jameel, who are living through their own civil war in Syria.

They speak every day via Skype, the Jewish grandfather said.

While concerns about anti-Semitism have been subsumed by the more immediate worries of those living in a nation at war, the use of anti-Semitism as a propaganda weapon by both sides and the presence of neo-Nazis on both sides of the line have also been underreported. And while anti-Semitic violence has been low since a brief spike during the Maidan period in early 2014, vandalism of Jewish sites continues apace. (Link http://www.jpost.com/Diaspora/Ukrainian-rights-group-blasts-Russia-for-faking-anti-Semitic-news-405608) 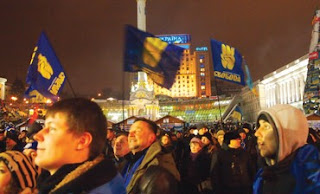 Statements by rebel leaders against Jews, coupled with Ukrainian glorification of Holocaust era nationalist fighters who collaborated with the Nazis provide enough reasons to fear a subsequent surge in anti-Semitism, even as the most extreme nationalist groups have tamped down on anti-Semitic sentiments in an attempt to disprove Russian claims of a neo-Nazi takeover.

I have just launched a Kickstarter campaign to collect the funds necessary to hire help to transcribe all of the interviews I have conducted and to fund (logistics and the war permitting) one final trip to Donetsk. With your help I believe that I can give the Jews of Ukraine a voice.

Please help me allow the public to learn of the story of the Ukraine conflict, the anti-Semitism, the Jew-centric war propaganda and the refugee crisis through the eyes of the Jews who lived through the inferno.