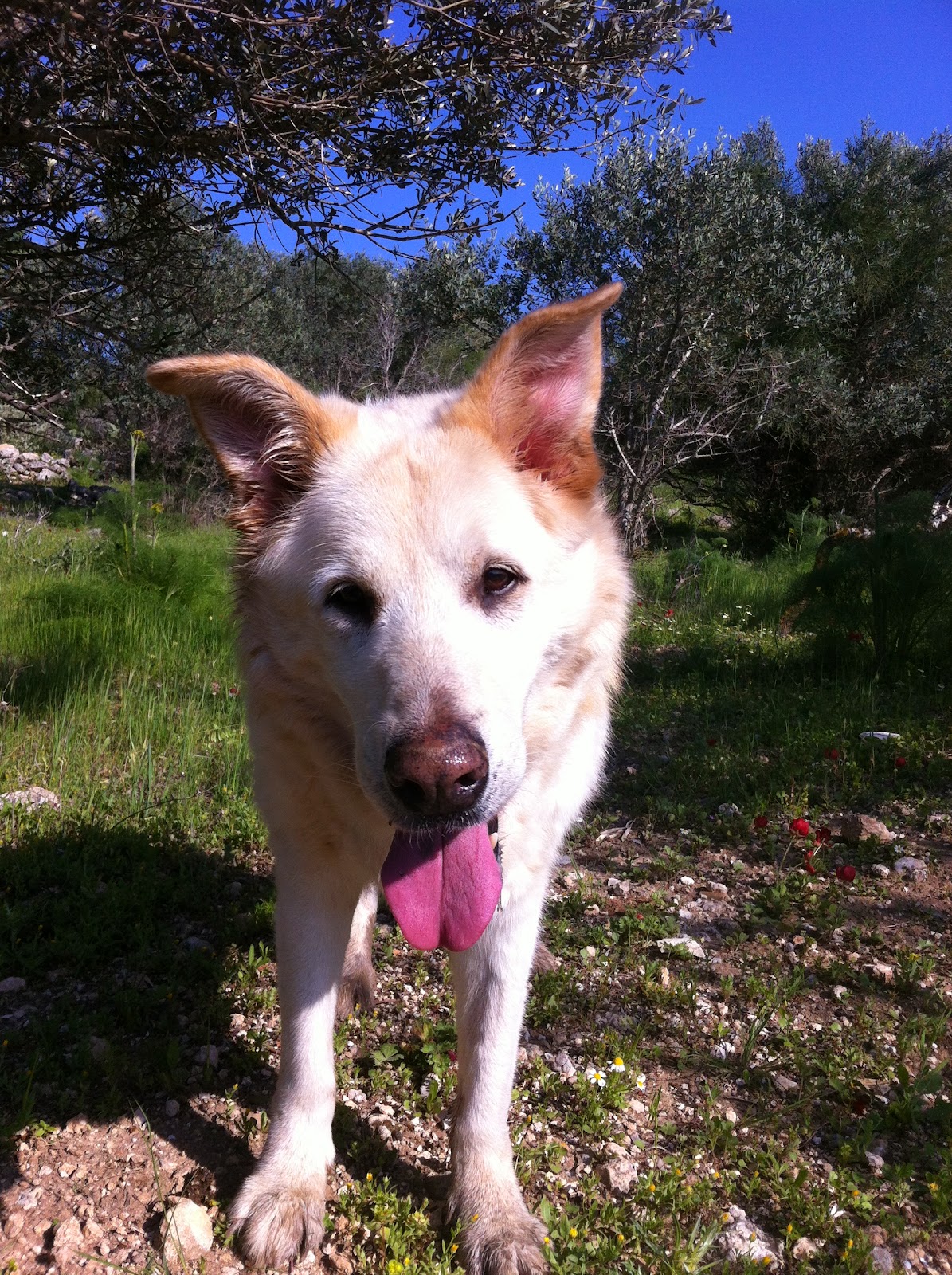 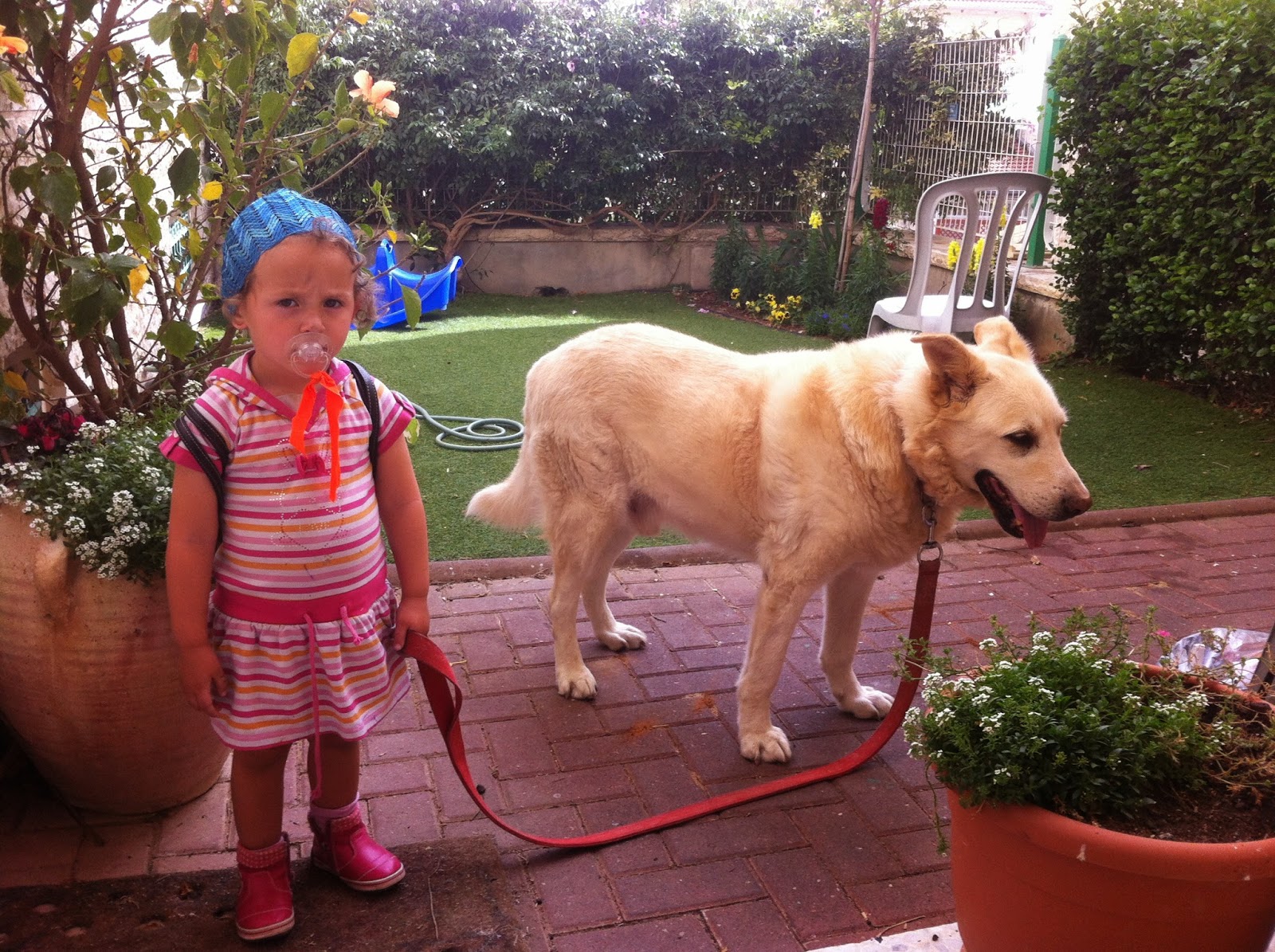 My kids found a litter of eight puppies near the communal dustbins outside our house, over fifteen years ago. We found good homes for seven of them, and my wife Julie (not a dog lover) agreed to let us keep one as our own home pet.

I was brought up with dogs in my home in England. Rufa, a lap-sized dachshund, was our pet and companion throughout my childhood. When he died, after ten years, we were devastated. My father brought home a lively mid-sized mutt we called Chad. Chad was then followed by a royal-looking Irish Setter....and my father's last dog (another Irish Setter) died just recently, with my father saying it was his last.

When I came to Israel, myself and my flatmates in the Old City of Jerusalem adopted a stray mid-sized dog we found wondering homeless in the streets. We invited him to join us in our flat and named him Doo-Dah.

When I became engaged to Julie, I decided to find a new home for Doo-Dah - and he moved out to a family living on a moshav.

When the last of this litter of eight abandoned puppies became our family pet, due to his then-fluffy white coat, we called him "Sheleg" (Snow).

Our vet reckoned Sheleg was a cross between Labrador and the indigenous Canaanite Shepherd Dog. Both breeds are known for their friendly disposition, helpful nature and intelligence.

Sheleg became an integrated member of the Morris family, part of our daily home scene, accompanied us on our many local hikes and was our companion on more distant adventures, camping and hiking around Israel.

Dogs in Ramat Beit Shemesh are relatives scarce. This is due to dogs being frowned upon here, as is quite common in many orthodox communities.

Nevertheless, Sheleg became a popular feature of Ramat Beit Shemesh and a generation of skeptical or fearful local kids, who were mainly unfamiliar with dogs, overcame their fear of the canine species by become acquainted with the quite large and always friendly Sheleg.

For me personally, Sheleg was MY dog. He was my responsibility in the house, and I was his master. We walked together literally every day for over fifteen years.

Sheleg sat patiently during the day in my home office, hour after hour, year after year, as I worked from home, busy with my professional and communal activities. My quiet friend.

On occasion, Sheleg was also a hero - such as in the middle of one night when he barked fiercely and persistently, frightening away a group of Arab youths, intent on robbing our home, or worse.

In recent months, Sheleg's age (around a hundred in doggy-years) slowed him down. Our daily strolls together shortened, until he could barely walk a couple of hundred meters. His hearing was shot, and Sheleg had signs of neurological problems.

Sheleg eventually could no longer stand up, eat or drink - and caught hypothermia in the recent cold spell. We booked him into the Veterinary Hospital in Beit Dagan, where he died this week.

In a culture steeped in ritual and tradition, there is no mourning process for losing a dog. And one feels rather awkward expressing any emotion, as "he was just an animal".

The closest formula is a condolence "Hamakom Yimalei Chisroncha" - God should fill your loss.

Me, my non-doggy wife, and our kids have all shed plenty of tears feeling that loss this week.

After all, for fifteen and a half years, Sheleg was our family's quiet, constant, undemanding, loyal, good humoured, and always friendly companion.