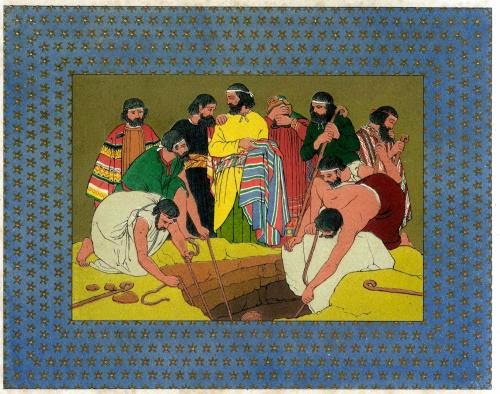 Whether the core problem here was favoritism by Jacob, or jealousy by Joseph's brothers, or arrogance of Joseph in flaunting his favoured status - or all three - the results were exile, catastrophe and centuries of bitter slavery in Egypt.

Many biblical commentators take Jacob to task for practicing favouritism. Rav Shimshon Raphael Hirsch, for example, writes, regarding Jacob's gift of the multicoloured coat to Joseph:

"That all this was not judicious or wise...that favouritism shown to one child had and has only harmful effects in the history of our forefathers and in the history of any home - these are made abundantly clear by the bitter consequences that ensue in this story. They are weaknesses that can easily recur in anyone's life, but are nonetheless weaknesses." (The Hirsch Chumash, Gen 27:2)

We are all aware in 2014 that favouritism is an unhealthy, even toxic, practice in families.

"Unfortunately, the consequences of parental favoritism are what you might expect - they're mostly bad. Disfavored children experience worse outcomes across the board: more depression, greater aggressiveness, lower self-esteem, and poorer academic performance. These repercussions are far more extreme than any benefits the favored children get out of it (negative things just have a stronger impact on people than positive things). And it's not all rosy for the favored children either - their siblings often come to resent them, poisoning those relationships." (Psychology Today)

However, this may not have been obvious to Jacob.

The whole sequence of stories in Genesis shows a down-selection, directed by God.

Adam, was exiled from Gan Eden, and his many descendants became Mankind Mark I; God then hit the reset button (Flood), and downsized Mankind 1 to just Noah + Family.

Noah was saved, went forth and multiplied, and his many descendants became Mankind Mark II; God then hits the reset button (Lech Lecha), and downsize Mankind II to just Abraham.

On a smaller scale, Abraham then had two sons. Abraham downsized by kicking out his older son Yishmael, to just leave (Sarah's favourite) Isaac.

And Isaac was almost also the victim of drastic downsizing, when his father took a knife to slaughter him.

Then Isaac's wife Rebecca attempted to orchestrate a downsizing, by selecting her favorite son Jacob, to displace the more senior son Esav. The result was murderous enmity between the two brothers, and painful separation for 23 years.

Within the context of such a history and family culture of down-selection and favoritism, Jacob's special treatment or favoritism of Joseph, specifically, was not unexpected.

After all, Joseph was the eldest son (bechor) of Jacob's favourite wife Rachel.

If the family planning had gone according to Jacob's wishes, rather than Lavan's duplicity, Jacob would solely have married Rachel, rather than the two sisters (and two maid servants), and we know there were just two sons from that marriage with Rachel, being Joseph and Benjamin.

If Jacob was guilty of "favoritism", as a undesirable attribute, then at no point in the story does Jacob himself seem to get-it.

Once Joseph was sold/disappeared and assumed by Jacob to be dead, Jacob favoured Benjamin instead, to the extent that Jacob initially refused to permit Benjamin to be used to obtain Shimon's release from Egypt: Jacob says "and only he [Benjamin] is left, and if harm befall him...then you will bring down my grey hairs with sorrow to the grave" (Gen 42;38).

Even in his last breaths, Jacob again designated Joseph as his favourite, delivering a double portion of blessings to Joseph's sons Ephraim and Menashe, who became two distinct tribes, with two portions of the Land of Israel, rather than one portion allocated to each of  Joseph's brothers.

So, whereas favouritism is considered a bad parenting trait today, I do not see that we can learn this important lesson from the story of Jacob.

What we today call favouritism was, in Genesis, God's plan for refining and selecting His 'favourite' People, the Children of Israel, from the rest of Mankind.