Cliffhangers in the Parsha 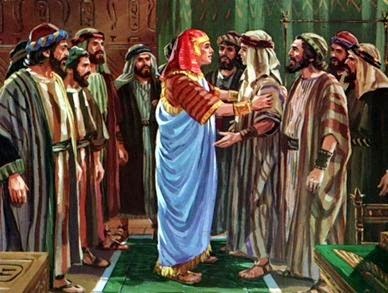 Last shabbat (Miketz) in shul, as the sefer torah was being carried from the Ark to the bimah, I whispered to my 21 year old son Yonatan - "He's done for! Yosef's been rotting in prison for years - and now the butler has forgotten all about him. He doesn't stand a chance. The eleven brothers will be the 11 tribes of Israel."

Yonatan gave me a quizzical look.

One could make a similar remark this week, at the turn of the parshiot (Miketz/Vayigash).

"Yehuda's has entered a guilty plea to Binyamin stealing the Prime Minister's cup. He's offered that all the brother's will be slaves to the PM - and been rejected. Yehuda is told to forget it, and that Binyamin stays while the brothers go home. Game over. They'll all go back to Canaan. They'll explain to Yaakov how they tried to save Binyamin, and failed. Yakov will die from grief. The Sons of Leah will take over Israel..."

Whoever split up the five books of Moses into weekly parshiot (in Babylon around 600 BCE?), had a sense of drama. And he knew the impact of a cliff-hanger.

In modern parlance, a cliff-hanger is usually a suspenseful moment in a movie or TV drama, often before a commercial break, or at the end of one serial...to encourage the curious viewers to rejoin the show later.

On occasions, cliff-hangers can be at the very end of a movie or series, to lure the audience to watch the next series. Think of the famous "Who Killed JR?" at the end of a Dallas TV series. The classic robbers movie The Italian Job ends with the getaway bus perched over the edge of a cliff, with the stolen gold slipping away into a ravine - literally a cliff-hanger.

I find it regretful that, because we know these Bible stories so well, from reading them every year and from studying them together with the famous commentaries, that we have lost the naive drama of the stories themselves.

When were we truly horrified at Cain's fratricide of Abel? At Abraham's willingness to murder his own son Isaac?

Are we devastated and deeply disappointed by the dreadful stories of murder-threats, expulsions, lies, cheating, scheming, manipulations & abuse which fill the pages of Genesis? These are our patriarchs, and yet their family behaviour & dysfunction should strike us as horrific.

Even if we do know that, at the end of the story, things will sort of work out. And we know the commentaries off-by-heart, which explain much of the behaviour in a way which vindicates the patriarchs from many of their actions.

There is value in re-creating the first drama, genuinely traveling the ups and many downs of the stories of our forefathers, as if for the first time. Feeling the moral outrage.

And also thrilling in the moments of pure pride - the naches we should get from Yehuda's courageous, impressive and heroic speech to Yosef in this week's parsha Vayigash. In that moment of Yehuda's heroism, Am Yisrael's future is assured.

I find tremendous value in switching off the sophistication for a while, and instead to play through, mentally and emotionally, the wonders and the what-ifs of the dramatic and ethical cliff-hangers in our parshiot.