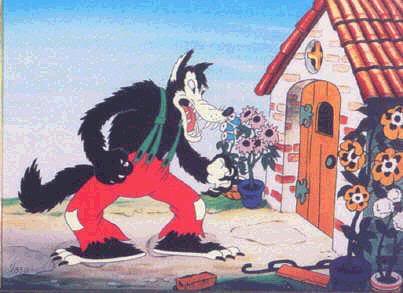 Barack Obama said that his red-line in the Syrian Civial War would be the use of chemical weapons; yet, the world witnessed the sarin attacks on thousands of Syrian civilians, and then Obama pulled back from delivering the planned attack on Syrian targets.

Predicatably, the more right wing among us called Obama "yellow-belly" or many equivalents. While the less sanguine were relieved at Obama's caution about getting the US involved in yet another far-away war.

Every parent, teacher and boss knows that one must be careful about making threats - "if you do this, then...".

Making a threat of ensuring that there will be specific consequences to a specific act, is a commitment.

Like any commitment, failure to make good on the threat usually results in reduced credibility.

So the first rule about threats, is one must be equipped and willing to carry them out.

"I'll huff and I'll puff and I'll blow your house down!" may frighten young children, but an adult will probably shrug or laugh it off; it being common knowledge that wolves can't blow-down stone houses, however, much they may huff and puff.

On the other hand, the purpose of a threat is to change the undersired behaviour.

There is, by a threat's very nature, the option of not delivering the second consequential element.

This introduces the aspect of gambling, which makes the practice of threats so interesting.

"Tresspassers will be shot!" blasts the sign at the edge of the straberry patch.
However, most farmers, though owning a gun, are unlikely to decide to shoot an actual tresspasser.
As long as the sign frightens people away, it's done its job.
On the other hand, the kid may jump the fence, regardless of the threat of being shot, because the risk seems less than the temptation of the strawberries.

In Obama's case, he declared the use of chemical weapons to be a red line, with the intention of stopping Assad from using these vile weapons.

Hoever, post facto, the threat having failed to change the undesirabe behaviour, Obama is now faced with a decision whether to deliver on the threat, or not.

Will the farmer shoot the kid who he catches tresspassing?

As a professional lawyer, Barack Obama has decided to play a delicate game.

In effect, he's the farmer who decides to obtain a court order to have the tresspasser shot.

Of course, here in the Middle East, our over-riding concern is not Obama's threat to Assad, but his implied threats to Iran.