Who Do You Prefer – Africans or Arabs? 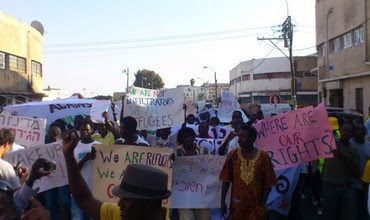 Since the horrific gang rape of a Tel Aviv teenager (in front of her forcefully restrained boyfriend) by a group of  Sudanese youths, there has been national outcry calling for the deportation of the African workers.

The issue of (mainly) Sudanese workers had been on the political back-burner until now, with National Union MK Michael Ben Ari being the sole politician to consistently have campaigned for change.

Since the rape case, reining in or expelling African migrants has been capturing the headlines, and politicians across the spectrum have stepped in.

Eli Yishai, Interior Minister, has formed a committee (always a good idea, in politicians minds) to review policy on migrant workers, and the courts have cleared some initial deportations (around a thousand workers will be repatriated). Prime Minister Netanyau recently spoke about the five strategic threats facing the State of Israel - and migrant workers was his number five.

As for the scale of the problem, The Jerusalem Post quotes Prof Sofer of Haifa Univerity:

The bottom line, it seems to me, is that the economics of labour will inevitably adjust to compensate for the loss of (in the most optimistic case) 60,000 African workers.

There is no way that Jewish workers will replace the Africans.

So what will happen to the vacuum (which will result in raising the price of labour)?

I suspect it will probably be filled by more workers from , or the … or wherever humans are available to supply the price/quality/quantity of manual labour demanded by ’s economy.

Or, even more likely, from closer to home, being Palestinians (from the West Bank and ) and Arab migrants from elsewhere (, …). Joining their 300,000 colleagues and countrymen currently illegally living in Israel.

Until the next round of terror, G-d forbid, leads to action to expel them also.

Before leaping into mass expulsions of the Africans (and the inevitable Israeli left-wing & international NGO's counter demonstrations etc) perhaps should take a look at other countries who have faced similar problems (the with the Mexicans; with Pakistanis & Polish; with the Turks etc..) – so see what techniques have proven effective – and those which are solely palliatives, to patch over today’s headlines.