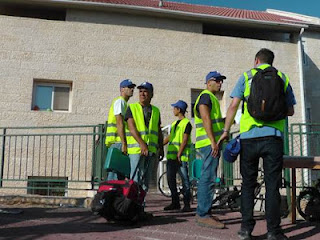 Today, fifteen families were evacuated from their homes in The Ulpana Neighborhood of Beit El.

As I listened to the radio this morning the interviewer asked one of the evicted families “what’s the big deal? So you’re moving house…!”

Perhaps he was ‘just’ being facetious and provocative – radio interviewers are, after all, first and foremost in the entertainment industry.
On the other hand, taken at face value, the question astounded me.

It is true that being evicted from your home entails the same physical process as voluntarily moving home.

Finding a new place to go, packing your possessions, saying goodbye to the neighbors, etc.

In the same way that rape involves the same physical act as making love.

Or stealing an object involves the same physical process as borrowing it.

In an apparently unconnected context, a local RBS rabbi wrote, regarding the infamous Bet Shemesh spitting incident in January 2012:
Poor 8 year old Naama Margolese. If my child was spat at, I would wipe the spittle off, gently, wipe away her tears, give her a piece of her favorite chocolate, tell her there are bad men in the world, and in 10 minutes it is over.

The missing element from these parallels (rape = making love etc) is Violation.

Violation and Trauma make all the difference in the world to the rape victim, the victim of a robbery, and an 8 year old girl who is spat at, in hate, by a rabbinical looking man.

Violation and Trauma is also the difference between “moving house” and being evicted from your home in Beit El by the Government of Israel.

I have had the privilege of working closely with families who were among the 9000 Jews evicted from Gush Katif in 2005.  Almost seven years later, the wounds are still raw. Their sorrow is still worn on their sleeve. The trauma is ever-present.

Today in Beit El was a day of Violation & Trauma.