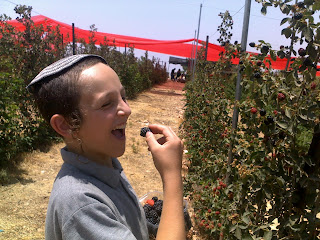 We set out today to join the popular cherry picking festival at Rosh Tzurim in Gush Etzion.

This is an attraction for visitors from all over the country – and has become more and more popular in recent years, particularly as the security situation has improved over-the-green-line. It has become a social gathering, as well as a fun family outing.

As a aside, I acknowledge the unknown fellow who first pioneered the concept of 'pick-your-own'. Whoever came up with the bright idea of replacing imported cheap agricultural labourers, with middle class fee-paying families-at-leisure, deserves to be inscribed in the Book of Commercial Genius.
The place was packed, yet we found a space in the large car park/field, and were about to join the crowd waiting for the shuttle bus to the cherry orchard, when my son-in-law Daniel Gilad suggested we skip the cherries, and go pick blackberries.

We piled back in the car, drove back down the road a few hundred yards in the direction of Beit Shemesh, took a right turn down a country road to the Chavat Eretz HaAyalim (literally The Deer-land Farm), following hand-scrawled signs for the blackberries/raspberries (“Pettel”).

There were less than a dozen cars at the site, and we were permitted to eat the succulent berries fresh off the bushes to our heart's content – and solely had to pay for entrance and the berries we took home.

In addition to the picking, there was also make-your-own pita bread, using a black metal hotplate, above a fire of twigs, assisted by a Genuine Bedouin from a nearby village, who was apparently born with asbestos fingers.

There was plenty of room to settle down for a picnic, schmooze, whatever. No-one was in a hurry.

For a fun few hours for the family, that was reasonable value. For a few boxes of berries, it was a rip-off. But who's counting?
.
It was an altogether more enjoyable experience for our off-the-beaten-track family than joining the throngs at the cherry orchard.

Does that make us anti-social, or what?