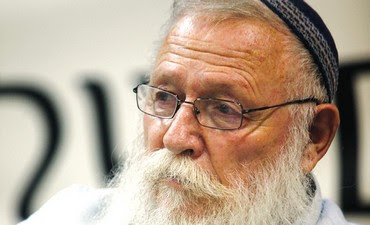 This year’s Israel Prize for Lifetime Achievement is being awarded to Rabbi Haim Druckman.

Rabbi Druckman is a leading National Religious rabbi and was also a Member of Knesset (1977-2003). His impressive achievements include pioneering the combined IDF + Yeshiva “Hesder” program, and heading up the National Conversion Committee for 25 years, which has implemented a fast-track program for converting non-Jewish Israeli citizens to Judaism.

Also featuring on his CV are that in 1964 he founded the Ohr Etzion B'nei Akiva Yeshiva Highschool, where he remains Rosh Yeshiva. In 1977 he established the Ohr Etzion Yeshiva, which for many years was the largest Hesder Yeshiva in the country, and in 1995 founded the Ohr MeOfir academy for highschool graduates of the Ethiopian community. Since 1996 he has also been the head of the Center for Bnei Akiva Yeshivot and ulpanot in .

Rabbi Druckman has been caught up in a few controversies during his illustrious career.

In 2008 the (Hareidi dominated) Rabbinate's High Court overturned a specific conversion of a woman who apparently never lived a religious Jewish lifestyle, as required by Jewish Law.  In addition, the Court ruled all the conversions performed in the last several years by Rabbi Chaim Druckman, the head of the Conversion Administration, were hereby null and void. The number of people directed affected by this decision is unknown, but was believed to be in the thousands.

As it happens, that Rabbinate High Court Ruling was itself subsequently overturned and the conversions were all re-instated.

Another controversy, which has led this week to calls for canceling the Israel Prize decision, was Rabbi Druckman’s failure to stop the Headmaster of Netiv Meir from abusing boys under his care.

According to reports, in the 1990’s, Rabbi Druckman was told then that Rabbi Ze'ev Kopilovich, Netiv Meir's rosh yeshiva, was sexually abusing students. Druckman apparently failed to report the allegations to police and protected Kopilovich, keeping him in his job and allowing him free access to students.
Kopilovich later pleaded guilty and was sentenced to 3 1/2 years in prison.

The organization “Takana Forum” was established by the National Religious leadership to prevent such cover-ups in the future.

Ironically, when Takana exposed allegations against Rabbi Motti Elon (since resulting in criminal charges against Rabbi Elon), Rabbi Druckman was reported to have made the following statement:

"I say to my students: the words of the Sages are sacred and true. They are not slogans. And this is an example. Our Sages said:  'If you saw a learned man commit an offense at night, do not pursue him about it during the day, perhaps he has repented.' It is not our task to delve during the day. And even when there are offenses, there is such a thing as repentance. He who falls, did not fall for life."

This, and that Rabbi Druckman continued to host Rabbi Elon in his yeshiva to give classes, was understood to be overly-supportive of Rabbi Elon.

In light of these controversies, there are now calls to review the Israel Prize award to Rabbi Druckman.

Following these calls, Rabbi Druckman has publicly expressed regret that he failed to report the allegations against Rabbi Kopilovich to the police.

“I immediately terminated Rabbi Kopilovich employment, but did not realize I was required to also report the allegations to the police”, Rabbi Druckman told Maariv newspaper.
It is interesting whether Rabbi Druckman's own words, about Rabbi Elon, could also be used (by Rabbi Druckman) to justify overlooking his own failings, in order to highlight his many important achievements.