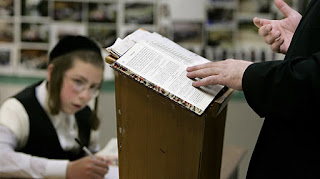 "Six of the Best" was the expression wryly used to describe the formal punishment of being beaten on the buttocks six times with the headmaster's wooden cane.

Over thirty years ago, I was educated in posh English boarding schools – in Yorkshire, and the world-renowned (where the game was invented); corporal punishment was encoded for over four centuries into the school rules (Rugby was founded in 1557).

You had to have done something pretty 'bad' to deserve the cane, particularly the top-score of six strikes.
Lesser offenses received lower counts, and there was a range of non-caning corporal alternatives, such as the ruler (across the hand), the shoe and the slipper (on the buttocks).

I myself managed to complete eleven years of posh schooling, without my buttocks ever meeting the headmaster's cane. (I lost count of the milder slipperings etc).
Although outlawed in for well over a generation, and in Israel since child protection laws were enacted in the 1950's, many chedarim (religious primary schools) in still practice corporal punishment.

Those responsible for chedarim have pointed to the classic Jewish texts to support this practice:

"He that spareth the rod hateth his child, but he who loveth him chasteneth him betimes" (Proverbs )

A full discussion on the pros and cons of corporal punishment in a school setting is beyond the scope of this article.

Indeed – such a discussion would actually just be a smokescreen…

What has happened in some chedarim is that, under the guise of "corporal punishment", teachers/rebbes are behaving as thugs.

Violence by adults against children under their care has become the accepted practice, by some cheder/school administrators, the teachers, the children (nebech), the parents, the rabbonim, their whole community.

We are talking about teachers allegedly:

and along with inestimable damage to these children's psychological health – and spiritual welfare.

A secular Israeli related that he had been brought up orthodox, and when he was in cheder, the teacher used a whip with three leather thongs to beat him and his classmates. The teacher gave a name to each of the three thongs: Abraham, Isaac and Jacob. Due to the dreadful associations, the boy gave up praying (the central prayer the Amidah opens with "the G-d of Abraham, the G-d of Isaac and the G-d of Jacob"), and eventually entirely left the religious fold. He does not know of even one boy in his cheder class who remained religiously observant into adulthood.

Such violence by adults against small children under their care must be immediately stopped. 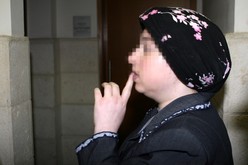 Parents and community leaders need to abandon their passive and accepting response to this violence against their own children.

It is not behaviour which can be glossed over as "traditional", "part of the culture" and explained away by using smokescreen halachik arguments which are about corporal punishment in schools.

Even in my posh English school, the lines were clear. Yes, to corporal punishment. But if any teacher had dared, for example, to strike a child across the face (I don't recall even one such incident in ten years in these Christian institutions), the teacher would have been immediately dismissed and in all likelihood the police called in.

And this is not an issue for rabbonim to 'quietly sort out'. The rabbonim (I have spoken to) are well aware of the violence, and have been unable or unwilling to take measures to stop it.

Unfortunately, the parents themselves have been unwilling to report the violence against their children to the appropriate authorities, due to an overwhelming dread of reprisals. They have a point - there have been several cases in Beit Shemesh/RBS where parents who dared to report child abuse in chedarim have been intimidated and chased out of the community, the city, even the country.

A community rabbi, well acquainted with the violence, warned that the parents have every reason to be fearful – physically. He claimed that a particular cheder, known for its institutional violence to children, is run by people also capable of violence against adults. "It is an evil empire", he said, grim faced.

The time has come to call the violent behaviour in some chedarim what it is – criminal thuggery.
These 'teachers' face around nine years in prison (on each count) for their routine crimes against the children.

And the rings of adults who protect and even justify the thugs, are enabling child abuse – they are themselves criminals under Israeli law. They face six month prison sentences for failing to report these crimes.

The correct and only effective address for parents of these children who are victims of violence by adults, is to report both the thugs and their enablers to the social services and the police.

Parents - All it requires, is to finally put the safety of your child, ahead of protecting the thugs and their cohorts.