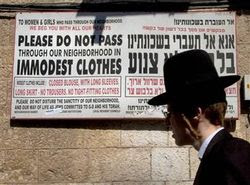 I was contacted yesterday to ask if I would be willing to participate in a BBC panel of Beit Shemesh residents, to discuss the situation at Orot Banot.

When the Israel Defence Forces undertake operations against terror groups, ’s critics throw the word “disproportionate” into their (knee-jerk) condemnations.

As in: The top UN human rights official says 's military response to the firing of rockets at its territory by Palestinian militants is "disproportionate."

Here in Beit Shemesh, the dispute between the ultra-orthodox “Sikrikim” and the Orot Banot school, has indisputably become the main news-story in .

Whereas the news abroad is full of human-interest stories, here in Israel's corner of the Middle East we’ve got existential threats from , the Syrian civil-war, Islamic Fundamentalists elected to power in , Hamas joining with the PLO… Some reasonably serious news items.

Nevertheless, literally half of the morning news on the radio and hours of TV, has been taken up with discussions about the behaviour of the “Sikrikim”, and other gender discrimination issues in wider Chareidi society, such as gender-segregated buses, and “Modesty” signs posted in Chareidi neighborhoods.

And Prime Minister Benjamin Netanyahu has raised the prospect of dividing Beit Shemesh (100,000 residents) into two cities – a Chareidi city, and a non-Chareidi city.

The title of the proposed BBC Forum discussion was “Are Ultra-Orthodox Extremists a Threat to ’s Democracy?”

A reasonable question, in light of the wall-to-wall press coverage of the Orot Banot story in .

Of course the answer to the BBC’s question is a straight “No”.

That’s why I said I wasn’t interested to participate, and probably why the panel discussion idea didn’t get off the ground. Such a daft question, doesn’t justify a panel discussion.

Of course, the issues raised by the sikrikim have wider relevance in Israeli society, but, actually, it is a very focused territorial squabble between a couple of hundred extremists neighbors, and one local girls school.

The Beit Shemesh Parents leaders, particularly Rabbi Dov Lipman, have organized an outstanding campaign, and have succeeded in getting this local dispute front-page national and even international exposure.

Literally, beyond our wildest dreams.

At this point, it’s now time to re-adjust the balance, and to examine whether the proposed solutions to the problem, such as turning Beit Shemesh into Cold-War Berlin, may be "disproportionate".