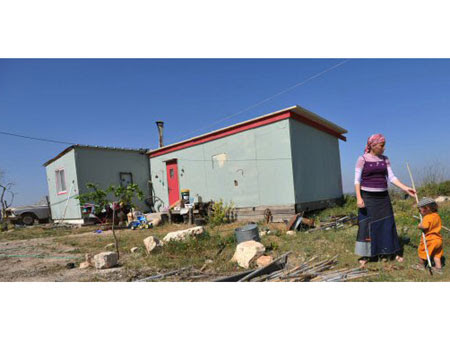 The incursion Monday night by dozens of 'settler' youth into the Ephraim Army Base in has received severe condemnation across the political spectrum.

In the course of the incursion, it has been reported that IDF vehicles were vandalized; tyres were set on fire; subsequently base commander, Col. Ran Kahane, was attacked in his car and lightly wounded (Later Note: although this "injury" seems to have been denied now by the IDF spokesman).

This incursion follows a series of aggressive acts, allegedly carried out by "settlers" as a part of "Tag Mechir" (Price Tag) policies. These include setting fire to a carpet in a mosque, a previous incursion into an army base (damage to vehicles), and graffiti scrawlings on the homes of left wing activists.

These acts have been widely reported as mindless hooliganism, and dangerous extremism.

Very little attention has been given to the Tag Mechir phenomenon as a whole, although both Makor Rishon and Hamishpacha have recently published focused articles on the Hilltop Youth (Noar Hagavaot), who are perceived to be associated with the Tag Mechir.

It is important to glance backwards, to better understand the Tag Mechir.

The story, in my mind, starts with the Oslo Peace Process – the recognition of the PLO as a peace partner, the importation of Arafat as the President of the Palestinian Authority, together with his murderous henchmen, and the accompanying chain of devastating terror attacks on Israeli buses, cafes, nightclubs etc, eventually reaching over one thousand Israeli dead.

There was a loud and pro-active anti-Oslo campaign of protests, largely orchestrated by Moshe Feiglin's shadowy Zoh Artzeinu.

This anti-Oslo campaign came to a drastic halt as the three shots rang out in the King of Israel Square in Tel Aviv, as Prime Minister Yitzhak Rabin was assassinated.

The right wing was then forced to engage in a "cheshbon nefesh" (an accounting of sins), with accusatory fingers pointed at politicians such as Benjamin Netanyahu, Rabbonim and protestors.

Next time around, the Gush Katif Disengagement in 2006, the anti-evacuation campaign chose a distinctly friendly theme – "We Will Succeed Through Love" was the chosen anthem. Demonstrations were large, law-abiding, with lots of rah-rah and tolerance. The evacuation was carried out, on schedule, and with no deaths or serious injuries. The evacuees hugged the troops, the troops handed out handkerchiefs, mission accomplished.

The new generation look at the Gush Katif Campaign with scorn, contempt and disdain. And they don't remember the 'chashbon nefesh' of the Rabin assassination.

A watershed post-Gush Katif stand-off was at Amona, a small village in Yehudah, where several houses were slated for demolition. Thousands of angry and resistant teenagers took on the Riot Police and Border Guards. It was a painful affair, hundreds of teenagers were wounded (including several of my relatives), some critically, and the government forces were accused of excessive violence against the young protestors.

The creed of some factions of this young generation has further developed after the relative success of Amona.

Any policies or actions the activists deem antithetical, will be met with force, not displays of love and tolerance. Thus the "Tag Mechir" – Price Tag – will be exacted for each act of the Government against the settler movement. The Price can be exacted against uninvolved Arabs, the Israeli police, army, politicians, whoever. There's a certain randomness and recklessness which is considered a tactical advantage over the enormous physical power and resources of the Army and Police.

In that context, Monday night a call went out to the faithful that there were rumours of imminent evacuations and destructions of several outposts ("maachazim"), with large troop movements in the field, and thus busloads of young activists were recruited on short notice to man the outposts and defend them from Border Patrol soldiers, riot police and bulldozers.

In keeping with Tag Mechir, it would seem a group of activists went one step further, and took the fight to the troops, in their camp. From the fact that out of an estimated fifty participants just one was caught, I surmise that the camp may have been effectively empty at the time. Perhaps the troops really were out, on their way to destroy the Outposts. Perhaps as a result of the activists incursion, no outposts were destroyed on Monday night.

In Israeli terms, this may have been a pre-emptive strike - and the army was apparently outflanked.

I fundamentally and totally disagree with the Tag Mechir policy – I'm by nature a "We Will Succeed Through Love" kind of guy.

The use of violence of Jew against Jew (by both sides – the Army and the Activists), and Jew against random Arabs, fills me with disgust and shame.

The solution lies in the Knesset and the Courts - to legalise the Outposts and New Villages in Yehudah & Shomron.

Not in setting Jews against Jews.

In my opinion, even if either side in this dispute achieves its tactical objectives, destroying these villages on the one hand, or the activists defeating the Army on the other, the Price Tag, for Am Yisrael, is too high.