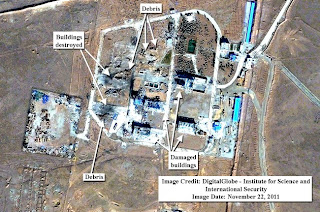 In the past two weeks, two top-secret Iranian military facilities have been damaged in mysterious explosions.

On Monday there was a large explosion reported in the western Iranian city of . is the home of a nuclear materials processing plant. That facility first went into operation in 2004, taking uranium from mines and producing uranium fluoride gas, which then feeds the centrifuges that enrich the uranium. Since 2004, thousands of kilograms of uranium flouride gas were stockpiled at and subsequently sent to the enrichment plant in Natanz.

The reported incident occurred about two weeks after Gen. Hasan Tehrani Moghaddam was killed together with 20 other Guard members Nov. 12 at a military site outside Bidganeh village, 40 kilometers southwest of . General Moghaddam was the head of 's Missile Programs, and his death is a significant blow to the Iranian military leadership. Satellite photographs (see above) of the military facility show extensive damage to the buildings, including some completely razed to the ground.

The Iranian's have officially blamed both explosions on "accidents".

Here, for the first time, I can exclusively reveal the perpetrators of these explosions.

Iranian officials have obtained copies of two British passports, which were left at the guardhouse of the nuclear facility, and were not recovered by their owners.

It is reported that the British subjects were officially visiting the top secret facility in accordance with an Iranian Government contract involving specialist piping units, awarded to "B & S Instalatorim Ltd", whose offices are registered in .

I have looked up the details online at the British Companies Registry and can reveal that the offices are located at the very same address as Blooms restaurant on .

However, Iranian sources are pointing the finger at , and claim these two employees of B & S Instalatorim Ltd, are actually Israeli mossad agents.

A spokesman for the Iranian Intelligence Services, Rabidd Soneh, was quoted by the semi-official Government news agency: "It was clear from the state they left the place in, that these were Israeli and not English workers."

I can now exclusively reveal that the names of the passport holders have been traced to British residents of Beit Shemesh, being Mr Jay/Yaakov Bondstein, aged 37, and Mr Sam Meragel, 41.

I took the liberty of contacting both Yakov and Sam, who both live close to my home, and attend a local synagogue on Nahal Dolev, Ramat Beit Shemesh.

Yaakov wasn't home, so I spoke to Mrs Kasefet Bondstein, and explained the nature of the Iranian allegations. Kasefet was adamant that these rumours were "absolutely absurd". Kasefet claimed that Yaakov is not in the piping business, but is a physiotherapist. At the time of the incident in , she said, Yaakov had been treating a local gardener with chronic scoliosis, a spinal condition, here in Bet Shemesh.

I subsequently found Sam Meragel at Mincha, so I asked him if he is aware that his British passport had been found at the guard house of the Iranian Nuclear processing facility at ?

Sam said he was not aware, but that he's pleased it has been found, as he lost it about six months ago, when he participated in the Jerusalem Marathon.

"This is the second time it's gone missing, and it cost fifty quid each time", explained Sam, "the other one turned up in Dubai, but I never got it back."

As we left the synagogue, Sam immediately got on his cellphone, to try to contact the Consular Division of  British Embassy in Tehran, to ask them to kindly help retrieve the passport. Sam eventually got through, but he told me that initially all he could hear was some guys shouting in Persian.

Eventually, one of them said, in broken English, "British passport? One hundred pounds. Any name you want."