Poetic Justice and The News of The World 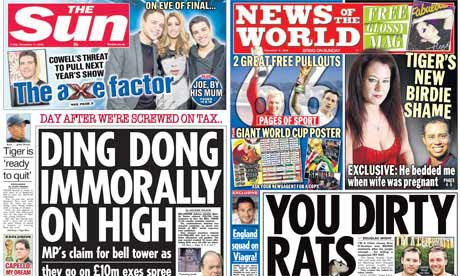 Although foreigners associate the British media with the BBC drama classics, The Times of London, and the intellectual Radio 4, this does not represent the mass media in the .
It is impossible for Israelis (for example) to grasp the sullied lowness of the popular media culture in .
The “tabloids” in are half-sized newspapers splashed with naked girls, sordid scandals about the currently famous, and the football results. The IQ of their intended readership is aimed at around 6 years old (adults). This media sector is referred to as the “gutter press”.
Whereas The Times, for example, has a circulation of around 500,000 – the Sun (popular press rag) sells over 3 million copies a day.
And so the scandal about the News Of The World (aka “News of the Screws”) , by far the most popular and scurrilous Sunday newspaper in Britain, that they have been tapping phones and voice mails for decades, even of murder victims, and of British soldiers killed in Afghanistan and Iraq, and new revelations about journalists bribing police – has a certain satisfying poetic justice.
Those who made millions, by digging up and publishing scandals, even where this involves destroying lives and reputations on a daily basis, for 160 years, are now also caught in a mega-scandal. And closed down.
Yet, I would just temper the British popular outcry, by noting that it takes two to tango.
Yes – the media barons generated trash by rote, and resorted to filthy tactics to obtain it.
But the British public willingly bought it, read it, and picked up the next copy tomorrow – literally for centuries.
So I guess the ultimate poetic justice was Rupert Murdoch’s decision to close The News of the Screws.
“If you, the public, have the chutzpa to get pompous and moralistic with me, I’ll take away your trash you so love.”
News of the World