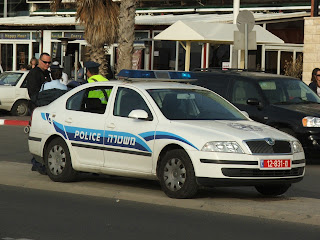 In the third such case in as many months, another anglo-saxon (English speaking) man has been arrested in Ramat Bet Shemesh Aleph under suspicion of child sex abuse.
This past Friday night, a 29 year old American tourist was arrested for allegedly sexually assaulting a 15 year old girl, and two teenage boys. According to Walla news-service, the man’s custody was extended in court yesterday (Tuesday), to enable the police to further investigate.
Beyond the published information, the man apparently is from , and he was lodging with an anglo family on Nahal Soreq, Ramat Bet Shemesh. The alleged incidents apparently took place in the and in the host family’s apartment. The man is apparently from a prestigious rabbinical family in NY.
This arrest follows the arrest several weeks ago of a 60 yo English speaking man at his home on Nahal Dolev, who allegedly operated also in the area of Nahal Revivim. This man is alleged to have committed sex crimes against minors. The man was remanded in custody for about a week, before being transferred to house arrest.
In an earlier case, around Sukkot, an English speaking resident of  Ramat Bet Shemesh was arrested under allegations of sexually abusing several minors. The man was placed under house arrest during the police investigation.
All three cases are now under active police investigation.
Other police investigations have been opened in the past few months against several other Bet Shemesh and Ramat Bet Shemesh residents, including residents of Givat Sharett, Nahal Lachish, Nahal Uria, Shvil Hagichon, Nahal Kishon and other locations, all on allegations of child abuse.
A convicted sex offender has also recently completed 2 years in prison for child sex abuse crimes, and has now returned to his home in Ramat Bet Shemesh.
Yet another Ramat Bet Shemesh resident, was convicted of sex abuse against children (incest), and is serving out a prison sentence.
Furthermore, a resident of Nahal Soreq, Ramat Bet Shemesh, has recently been found guilty in court on child abuse charges, and is now serving an 18 year sentence; this man is not expected to return to Ramat Bet Shemesh any time soon.

My Comment: There is a traditional attitude in all communities that "it can't happen here". This approach has been discredited time and again.

Because this is the reality. And every parent, and every child should be aware of the risks, and take appropriate and informed steps to better protect themselves and their families. The most effective defence, is awareness.
If you have any information which can assist the police with these or any other suspicions of child abuse, please call the Bet Shemesh police (9902222); you can also contact Magen, the new Child Protection Organization in Bet Shemesh/RBS, for information and practical advice about Child Abuse: MagenProtects@gmail.com.
Bet Shemesh child sex abuse Magen ramat beit shemesh