Close to the Fire 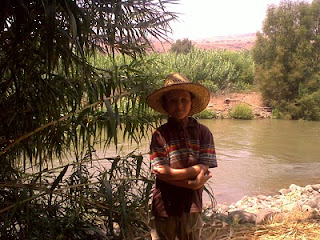 I have just 'landed' back home, after a marvelous week with the family on vacation in the Upper Galilee.

During a 'tiyul' (hike - pictured above) there were several (between 10-20, I guess) loud "booms" over a period of a few hours.
Some sounded very close - perhaps within a few hundred meters.

In the North of Israel, one is used to hearing aircraft breaking the sound-barrier with "booms", and also to hearing army excercises accompanied by various explosions.

However, these didn't sound like either...and we also heard air-raid warning sirens at some local villages.

The hike was particularly easy and flat, with water to dip in (prominent No Swimming notices were totally ignored), and is popular, with literally bus-loads of walkers around us.

A few people fidgeted, and seemed somewhat concerned, but, de facto, everyone continued their walk and splashing, business-as-usual.

My ten year old son asked what might be happening....

I opened up the question to our older children, and suggested I could think of three possibilities:

When we returned to our "tzimmer" (rented rooms), we heard the news, and the tragic death of Lt Col Dov Harari and the serious injury of Captain Ezra Lakia, at the hands of snipers from the Lebanese Army. According to reports, this attack was absolutely unprovoked, and took place during maintenance of the border fence, and the Israelis were our side of the border.

I am pleased to report that the IDF did respond to the murderous attack- three Lebanese were killed in the return of fire.