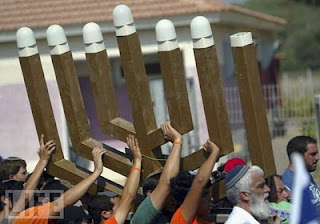 Two thousand years after Destruction of the , and 2600 years after the destruction of the , and now returned to the Land of our Fathers, our generation inevitably struggles to feel the tragic loss of the Mikdash, even on Tisha B’Av.
No-one understands the workings of Hashem’s plans.
There is no avoiding the fact that, even since the chorban/destruction, the period around 9th Av is particularly tragic for the Jewish people.
The timing of our tragedies, during Av, sharpens our otherwise-dulled sensitivity to the true source of grief on Tisha B’Av.
In my lifetime, I have felt no more miserable Tisha B’Av than five years ago, during the destruction and eviction from Gush Katif.
The year-and-a-half I had devoted, with so many thousands, to stopping the Disengagement, turned to deep grief at the moment of our failure, on Erev Tisha B’Av, and at the resulting scale of human suffering and political/military catastrophe.
The weeping girls, singing morale-builders, in the shul at Neve Dekalim, is an image which tore into my soul.
And marching in the together with the tear-streaked, sweating yeshiva boys carrying the Menorah on their shoulders from Netzarim in Gush Katif, to the kotel in , reverberated against images of Titus’ arch, of the Romans bringing the golden Menorah from the sacked  to .
And meeting with the thousands of Gush Katif refugees, dumped in tent cities, schools and hotels – shell-shocked, and forlorn. Many had only their clothes on their back – and their one ripped shirt (they tore kria – as they witnessed the chorban of their beautiful communities and homes)
Powerful symbols, vivid images, and undiluted human grief.
Eicha*…
--------
Last summer, on erev Tisha B’Av, my community of Ohr Shalom in Ramat Bet Shemesh was devastated by the unimaginable tragedy of the out-of-thin-air sudden death of Rivka Greenwald z”l, a mother to ten children and wife of our friend Gedalia.
The scene of the hurried, late night, vastly attended funeral in Petach Tikva, and her wonderful, dumb-struck kids at the graveside, left the heart crushed and eyes flowing with tears of bitter grief.
Last year, no-one in Ohr Shalom, nor indeed in the wider RBS community, needed reminding that Tisha B’Av is deeply depressing and endlessly tragic.
Eicha…
----------
And this year, this Av, the whole of Bet Shemesh was kicked in the gut, with the news that four members of the Manorah family has died in a plane crash, including two teenage girls, Rikki and Racheli, who went to school at Ulpanat Gila with my own daughters…
The funeral was vast, this past Friday, the incomprehensible loss and multiple tragedy affected literally thousands of mourning families. How can one begin to make sense of why, such a wonderful family – and such amazing kids.
Eicha…
----------
And so this pattern has followed through two thousand years – comes Av, comes tragedy.
At the national level, at the community level and for so many, at the personal level.
Eicha…