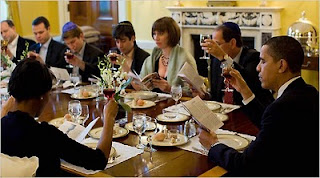 
(AP) — An unidentified Israeli official has confirmed that private discussions between President Obama and Israeli Prime Minister Benjamin Netanyahu included a strong request from the President that the upcoming Passover holiday not include the familiar refrain of “next year in Jerusalem”, citing the passage as provocative and unhelpful for future peace talks.


The Administration suggested replacing it with “next year in peace” or “next year in Israel”, but leaving the final wording up to both the Israelis and Palestinians.
Netanyahu is said to have balked at the request, indicating that the refrain dates back well before the UN Partition of 1947.  The Prime Minister reportedly attempted to diffuse the situation by noting that the declaration lacks any political significance, adding that most people living outside of Israel just “say the words without having a real desire to live anywhere in Jerusalem.” He further explained that, “at most, they would like to come for the Passover holiday, but only staying at one of the hotels located in western part of the city.”
HAPPY PASSOVER TO ALL OUR READERS