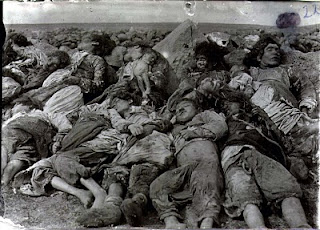 On March 4, 2010, a US congressional panel narrowly voted that the massacres of Armenian civilians between 1915-17 by Turks were indeed "genocide"; within minutes the Turkish government issued a statement critical of "this resolution which accuses the Turkish nation of a crime it has not committed" and withdrew their Ambassador in Washington, back to Ankara for consultations.

It does seem unusual that, almost a century later, the US Government is still in the throes of deciding the nature of the events which are estimated to have taken the lives of between one to one-and-a-half million Armenians, during the period of the First World War. These civilians were allegedly systematically murdered in forced marches, concentration camps, mass burning, drowning and mass executions.

It is also peculiar that the current Turkish Government should care so much – as these horrific events were carried out under the Ottoman Empire; therefore the Turkish Republic, which was established in 1923, could claim that it had no part in the murders.

And another curious element is the role of the Jewish lobby and Israel itself.

The Republic of Turkey's formal stance is that the deaths of Armenians during the "relocation" or "deportation" cannot aptly be deemed "genocide," a position that has been supported with a plethora of diverging justifications: that the killings were not deliberate or were not governmentally orchestrated; that the killings were justified because Armenians posed a Russian-sympathizing threat as a cultural group; that Armenians merely starved; or any of various characterizations recalling marauding "Armenian gangs. Some suggestions seek to invalidate the genocide on semantic or anachronistic grounds (the word "genocide" was not coined until 1943). Turkish World War I casualty figures are often cited to mitigate the effect of the number of Armenian dead.

Turkish governmental sources have asserted that the historically-demonstrated "tolerance of Turkish people" itself renders the Armenian Genocide an impossibility.
This consistent denial, stretching over many decades, has been backed up with efforts by the Turkish government and its agents to quash mention of the genocide – and have resulted in numerous scholarly, diplomatic, political and legal controversies. Prosecutors acting on their own initiative have utilized Article 301 of the Turkish Penal Code prohibiting "insulting Turkishness" to silence a number of prominent Turkish intellectuals who spoke of atrocities suffered by Armenians in the last days of the Ottoman Empire (as of yet, most of these cases have been dismissed). These prosecutions have often been accompanied by hate campaigns and threats, as was the case for Hrant Dink, the Turkish-Armenian intellectual murdered in 2007. The leading lawyer behind the prosecutions, Kemal Kerincsiz, is now under investigation for complicity in the underground Ergenekon network.

This investment in official denial, has resulted in any recognition of an Armenian Genocide, by governments and organizations, as being viewed by the Turkish Republic as an act of hostility.
To date, some 20 countries have nevertheless recognized the "Genocide", including France most recently.

Interestingly, many Jewish scholars have viewed the Armenian events as a precursor of the Holocaust against the Jews 20 years later. Indeed the term "Genocide" was coined by Raphael Lemkin, in 1943, who stated that he did so with the fate of the Armenians in mind, explaining that "it happened so many times... First to the Armenians, then after the Armenians, Hitler took action."

However, the Jewish lobby in the USA has worked intensively over the past decade to block recognition by the US Government of the Genocide, for two main reasons:

1. They wished to preserve the uniqueness of the Holocaust, and viewed the use of the word Genocide in the context of the Armenians as reducing that uniqueness.

2. The close strategic relationship between Israel and Turkey was strengthened by using the Jewish lobby in Washington to block the US recognition of the Genocide.

However, with that relationship between the Israeli and Turkish Governments now severely damaged by Turkish Prime Minister Erdogan over the past year, the Jewish lobby seems willing to change sides on the Armenian issue.

And while the word "Holocaust" will solely and exclusively describe the Nazi murder of Jews between 1939-45, the word "Genocide" would also be applied to other systematic mass-murders, such as of the vast massacres in Armenia, the Indonesia, and in Darfur.
Amenian genocide Israel Jewish lobby turkey