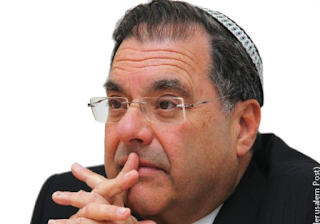 However, according to the current regulations, town rabbis, whose salaries are paid for by the Ministry of Religious Affairs, are required to retire when they reach 75; nevertheless, the Chief Rabbinate can decide to grant an extension for a further five years for a rabbi to continue their official positions.

At the age of 80, all City Rabbis are required to retire.

In the recent past, there was, in practice, no upper age limit and indeed, State funded city/town rabbis were considered life-long positions.

In Rabbi Riskin's case, the committee did not immediately grant him a five year extension, rather they have reportedly invited Rabbi Riskin in for a meeting.

This has cooked up a storm, with widespread media coverage. National religious rabbis & lay leaders have voiced strong criticism of the Rabbinate and support for Rabbi Riskin.

It has become a political issue - with this case highlighted as an irresponsible act of a chareidi-dominated Rabbinate, against a successful and well respected rabbi who is on the liberal side of orthodox Judaism in Israel.

I think this case actually highlights the mandatory retirement issue, particularly as it relates to State funded positions.

The mandatory retirement age in Israel is 67.

When there is mutual agreement between the employee and employer, they can voluntarily remain employed after 67.

The only other exception I am aware of, is State funded rabbis, who in practice will continue in their positions until 80.

This is not good for rabbis - who need a dignified exit strategy from their positions at a reasonable age.

It is not good for the public, who can be ill-served by rabbis as public servants, who are 'beyond it', both functionally and in their ability to keep up with a fast-changing world.

And it is not good for the rabbinical profession - which has a limited number of State funded positions, which should be opened up to make room for younger rabbis.

I personally think Rabbi Riskin is charismatic, wise and successful rabbinical leader, who has achieved miracles in building up Efrat. He has also influenced and educated thousands of students in his various institutions. B'H he is still active at 75!

However, I do think he and all his colleagues need to be seen into dignified retirement, at least from State funded positions, at the standard age of 67. At a push, like judges, at 70.

75 year old Rabbi Riskin should be released, along with his elderly peers, to enjoy his children, grandchildren and to gracefully become the grandfather, rather than father, of Efrat.