Who Is Turkey's Yair Lapid? 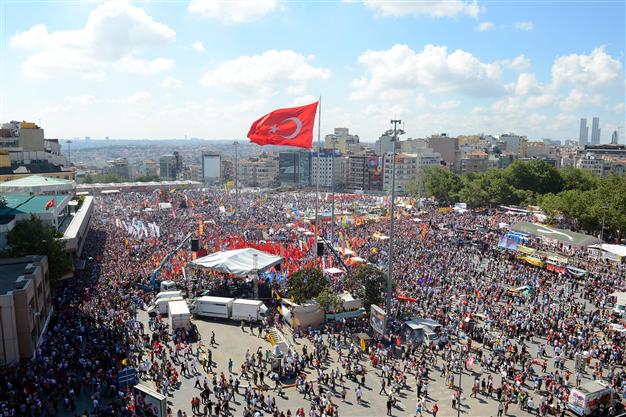 The current demonstrations in Turkey are not parallel to the Arab uprisings in Egypt, Tunisia and Syria.

Turkey is a fully-fledged Western-style democracy. (Well, all right, a Western Democracy Minus).

The end-game is not overthrow of dictatorial regimes or civil war.

A better analogy would be the social justice ("Housing" "Tent") demonstrations in Israel 2011.

In Israel, the spark which ignited the hundreds of thousands of participants in these protests was unafordable house prices.

In Turkey, it was the demolition of trees and of a park in Istanbul for a new development.

In both Israel and in Turkey it is predominantly the educated secular middle classes who have taken to the streets.

In both countries, this historically 'quiet' sector had reached the point of despair about a political establishment which had overlooked their needs and interests - effectively disenfranchising them.

A point of difference is the way in which the police tactically responded to the protests.

In Israel the police used non-violent means of controlling the demonstrators, whereas in Turkey, the protesters in Taksim Square have been tear and pepper gassed and the crowds  routinely water-cannoned, resulting in allegations of police brutality.

In Israel, the social justice protests resulted in the push to the new center-left, with the formation and election of Yair Lapid's Yesh Atid as the new king-makers in parliament.

It is too early in the Turkish protest to predict if there will be a similar swelling of the center secular left in the next elections. And there is no charismatic leader of the protest movement.

There is little doubt that, if elections were to be held in Turkey tomorrow - Prime Minister Erdogen would be elected... for the fourth time.

And the protesters will remain disenfranchised.

On the other hand, right until the votes were counted up on election night, the same "no chance" was said in Israel about Yesh Atid's election potential.

Somehow, Yair Lapid, who was not even involved in organizing the Tel Aviv protests, but managed to subsequently ride the waves created by them, has become the second most powerful political figure in Israel.

So, the question that is seeking an answer is not "Will Edogan be Overthrown?", but "Who is Turkey's Yair Lapid?"