Been to the Kotel? Done the ? Hiked in the Golan….?

Well, consider something a little different. A tour of the “illegal outposts”.

Known in Hebrew as “Maachazim”, they are located throughout Yehuda & Shomron, and range in size and scale from well established villages, to a single temporary structure.

They are characterized by not having all the required Government permits. Once they do receive the full set of permits, they graduate from being a “maachaz” to become a “yishuv” (“settlement”).

The larger villages were established and built in an organized fashion, involving various Government Ministries. The tiny ones seem to have been established by an individual or small group of activists, and some lack even the most basic infrastructures.

During Chol Hamoed my family took a day-trip which included the maachazim of Adei Ad, Migron and Ramat Migron. We passed by or through many other maachazim along the way, including Shvut Rachel, Aish Kodesh and Givat Harel.

Adei Ad is a ten minute drive from Shilo and is the new home of my daughter Avital and her husband Yair. They live in a “caravan” – actually not a mobile structure, but a pre-fabricated two bedroom house.

Adei Ad is a well spread out rural village of around fifty families, including a shul (an unusual “Rambamist” design, with low seats, forming three sides of a square, with plenty of room for shul members to bend/lie down on the floor “lehishtachavot”), and a nursery school.

Many of the families are involved in agriculture, including extensive vineyards and olive groves, which are patchworked across the miles of open land around the Adei Ad village.

These activities have resulted in several clashes with local Arabs (goaded on by Left Wing extremists), and much politicking and positioning over land rights. It seems that there has been a passionate struggle for every vine and olive tree.

Politics aside, these are true pioneers – attached to the earth and willing to sacrifice sweat and, if necessary chas veshalom, blood, to establish and retain a Jewish presence in the Shomron.

After a hearty barbecue, we traveled southwards to visit Migron and Ramat Migron. 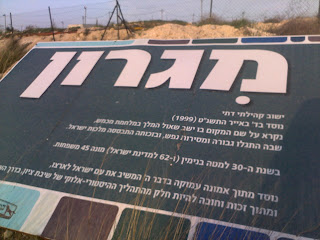 Migron is located a few kilometers south of Beit El, north of , and has been at the center of a storm, involving the highest echelons of the Government, Army and the Supreme Court.

Left Wing extremists have teamed with local Arabs to push to evict the fifty families from the maachaz and to raze the village to the ground  – which has been here, with the cooperation of various Israeli Governments, since 1999. 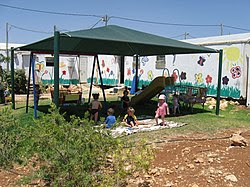 On the day we were in Migron, they had an information stand set up, and showed a short movie, explaining their plight.

The current status is that the Supreme Court overruled an agreement between the residents and the Government (that they would gradually move out over the coming three years), and stating that Migron must be evacuated by 1st August 2012.

This is in spite of the fact that no credible Arab land-owner has apparently been identified.

Our final visit of the day was to Ramat Migron.

Located a short walk from Migron, Ramat Migron is, in essence, a protest camp.

It was established four years ago by teenage activists (including some of my kids) to protest the Migron Agreement – which they see as a sell-out by both the Migronites and the Government. The original agreement they were protesting, would have relocated the residents of Migron to the Adam yishuv. Over the four years since then, other agreements have come and gone.

The shredding of the latest agreement, due to the ruling of the Supreme Court, is something of a dilemma to the Ramat Migron folks.

The day of reckoning, and planned destruction, is around the corner, but so also is the show-down between the Government, Army, the Legal System, the Pragmatists (the residents of Migron) and the Idealists (the youthful residents of Ramat Migron).

Although four years old, due to the many demolitions and evacuations by the army, Ramat Migron solely consists of two structures. 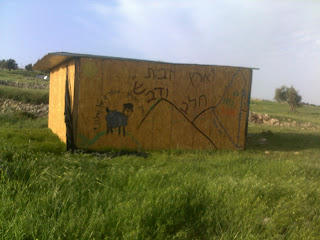 One brightly decorated wooden shed for the girls. 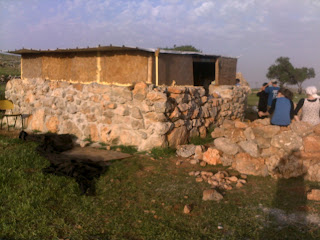 And a (relatively) rugged stone and wooden building about 500 metres of rough terrain away, for the boys.

A short walk away from both houses, we visited the remains of a stone and cement structure, which had been the envisaged home of Shira and Daniel Gilad, my daughter and son-in-law.

It was destroyed two years ago by the Army before the newly weds were able to move in. 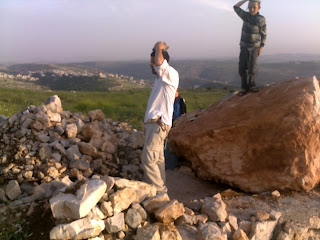 The large chunk of rock in the photo was placed on the ruins by a bulldozer, lest the kids (perish the thought) consider clearing it away, and rebuilding.

And thus concluded our Outpost Tours.

So, next time you are looking for something a little different, consider taking an off-the-beaten-track trip to visit ’s 21st Century “chalutzim”/pioneers!