Is Lag BaOmer Out of Control?

As every kid knows, Lag B'Omer is a celebration on the 33rd day of the counting of the Omer. This marks the last day of the plague which wiped out 22,000 pupils of Rabbi Akiva.

Lag B'Omer is also the anniversary of the death of R.Shimon Bar Yochai, the author of the Zohar and 'father' of Jewish Mysticism. Rabbi Shimon was the leading (surviving) student of Rabbi Akiva, and was an oft-quoted Tannaic leader, being the fourth most quoted voice in the Mishna.

Here in , Lag B'Omer is most popularly celebrated by the lighting of bonfires as well as joining the throngs making the pilgrimage to Rabbi Shimon Bar Yochai's tomb in Meron in the . In recent times, the bonfire lighting tradition has also spread to the Diaspora.

At this point, all seems well and healthy about Lag B'Omer – good clean fun.

You can call me a kill-joy, but unfortunately there is a dark and less happy side to the Lag B'Omer festivities...

In my opinion, these come in four categories:

Risk of Child Abuse: On a recent visit to the    ("Mercaz Hagana") in , they told me that the night of Lag B'Omer is their annual nightmare.

Consider (for a moment) that you are a child abuser.

Now picture a night where thousands of kids go out, with close-to-zero parental/adult supervision, all night, scattered throughout the neighborhood, sleeping in the open – unfortunately, Lag BaOmer is a pedophile's dream come true.

Incidents of rape and molestation of children peak on Lag B'Omer.

What Can You Do About It:

Speak with your children before Lag B'Omer.

Along with a physical safety message (see Dr Halberstad's letter below), also open an (age appropriate) discussion about their sexual safety.

Please note that there have been a spate of attacks by strangers on children in our neighborhood. B'H, some of those attackers have been arrested – but others are out there.

IMHO, there is no purpose in young children returning home at dawn.

So have a to-be-home-time, with a stated and agreed consequence to your kids returning home any later than that hour. If their friends ask why they're going home (“it’s only midnight!”), tell your kids they are welcome to blame you, their parents. "My parents said I must be home by such and such a time, or I'll get into big trouble".

Explain why they should always stay with their chosen group (friends, youth-club, school, shul, family, whatever) and only move between groups accompanied by at least one friend. They must never be on their own on the night of Lag B'Omer (accept when walking from A-to-B on a well lit and busy street).

If an older person (more than two years their senior) who is not a part of their group, approaches them and asks them to help them, such as to move wood, to find something in the bushes, to show them to a place they "can't find", and even if they offer your child a reward (sweets or money) or they tell your child it is a great mitzvah to help them, teach your children how to politely say "I can't help you. I am with Such & Such a group tonight."

(Roll play this with your kids – and create other scenarios).

Even though 'stranger danger' is a serious concern, there's a actually a much larger risk of your child being abused by someone he (and probably you) trusts. (Only one-in-ten acts of child abuse are perpetrated by strangers).

There are four basic messages that children need to internalize in order for any abuse prevention program to be truly effective:

1. Your body belongs to you

2. No one has the right to make you feel uncomfortable

3. No secrets from parents

Please educate yourself before speaking to your children so that your discussions generate light and not heat. Additionally, it is important for you to know – and to share with your children – that although “stranger danger” is a genuine concern, the vast majority of molesters are family members or people well-known to the children.

As Teaneck Police Chief Michael Bruno brilliantly said during a talk he gave on child safety, “We need to train our children to consider the “it” (the inappropriate action being done to them) not the “whom” (regardless of the relationship or stature of the individual who is doing it).

There are free resources available on our website www.kosherjewishparenting.com, the Los Angeles-based Aleinu Safety Kid Program: http://www.aleinu.net/AleinuChildSafetyInstitute/safetykid.aspx , and you can get a free DVD with abuse prevention information by contacting Ohel at http://www.ohelfamily.org/index.php?option=com_content&task=view&id=722&Itemid=852 Here are links to two videos Project YES released to educate you, and help you have these discussions with your children:

Video: Speaking to your Kids about Personal Safety: http://vimeo.com/25322132

Burns & Other Injuries: This is a posting written by Dr Moshe Halberstad of , and a resident of Ramat Bet Shemesh:

As Lag B'Omer approaches, it is worth noting that last year at Terem Urgent Care I saw a striking number of injuries associated with Lag B'Omer that were directly related to a lack of parental supervision.
Here is a partial list of some of the unfortunate injuries/illness commonly seen in association with this holiday.

1) Eye injuries/facial burns- involving severe burns to the cornea and face, resulting from bursts of sparks that commonly occur when unsupervised children attempt to add wood at close range to unstable,
poorly built fires. Almost all children were at the time being "supervised" by siblings. In addition to causing excruciating pain, such injuries can result in impaired vision and disfigurement.
In a six-hour period last year on Lag B'Omer, I referred more patients for emergency Opthalmologic and/or Plastic Surgery consultation due facial/opthalmic burns than in the two years I spent working in the .

3) Breathing issues- children with asthma or other chronic respiratory issues are particularly at risk on the night of Lag B' Omer, as anyone who walks outside and smells the air can imagine.

This year, it is therefore strongly recommended that all children who attend/build bonfires do so with parental supervision. Younger children in particular should not be permitted to be in close proximity and certainly not be allowed to approach and help "manage" the fire. Collection of wood and bonfire construction should also not
be done haphazardly (not to mention illegally). Last year I met many distraught parents who did not supervise their children and "never thought it could happen to their child." It is my hope that this year many of these injuries can be prevented.

Wishing all of you a happy and safe holiday.


While on the issue of physical safety, I would like to give kudos to the excellent annual Keren Yosef + Ezrat Achim fire safety campaign leading up to Lag BaOmer. 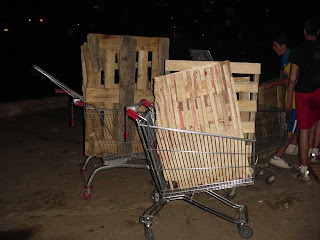 Let’s call a spade a spade.

It has become socially acceptable for kids to steal shopping carts for Lag BaOmer.

(The excuse that they ‘borrow’ them, only works if they obtain permission from the store owner, and then the kids return the shopping cart afterwards – neither of which happen)

I frankly find this astounding.

We spend so much time and resource teaching our kids the very highest standards of behaviour, before Man and G-d.

And then, whoosh! It’s a free for all, everyone's stealing other people’s property.

Shoplifting. Looting. Call it what it is.

In the name of Rabbi Shimon Bar Yochai and Rabbi Akiva??!!

I simply don't understand why our frum society smilingly tolerates this...?

(Picture for illustrative purposes only)

Stealing Wood: Ditto for the wholesale quantities of wood, which is often stolen from building sites, from people’s private yards, and from other kids.

Another issue, by the way, is the environmental damage caused by thousands of bonfires throughout the country, not to mention real danger for asthma sufferers.

In short – Lag BaOmer has become “hefker” night – a reckless abandonment on an enormous sale.

I propose that the time has come to rein in some of this excess.

Hopefully, such minimal controls would result in a safer and more ethical/educational Lag BaOmers for all!

Who wants to help get this in place before NEXT Lag BaOmer??