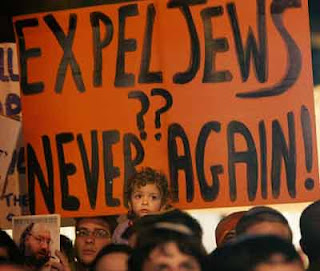 Today is 10th Av (although we are marking the 9th, due to Shabbat); the exact Jewish date that the decrees of Hitnatkut/Disengagement was carried out, with the forced evacuation of nearly 9000 Jews form their homes in 21 towns and villages in the Gaza Strip and from four villages in Northern Shomron.

Over the years, it has become clearer that the destruction of the Gush Katif and Northern Shomron settlements, was but a prototype for what was planned to be a much larger expulsion of many more towns and villages in the Yehudah and Shomron.

When Arik Sharon introduced Disengagement, at the Herzlia Conference in 2003, he did not present it as bringing Peace, presenting an Oslo-esque New Middle East, but rather an initiative taken in the context that there was "no Palestinian Partner", and future steps needed to be unilateral rather than negotiated.

The Disengagement was a process by which the State Israel would define its own borders.

This Disengagement therefore required Israel to voluntarily withdraw from all areas which, by 'concensus', would not be part of the future State of Israel. These were described as those areas outside of the "settlement blocks" - ie not Gush Etzion, Ariel and the large Jerusalem neighborhoods, such as Pisgat Zeev, Har Choma, Gilo, etc.

The Evacuation & Compensation Law, which provided the legal basis for the expulsions was framed in such a way that it was not specific to Gush Katif - but rather gave a general foundation for future evacuations.

The sneaking-in of four settlements in North Shomron into the evacuation process of Gush Katif was to provide a precedent for further, much larger withdrawals in both Yehuda and Shomron.

The "Security Fence" was planned by Sharon and implemented as a new national border of the State of Israel.

When Arik Sharon was stonewalled by his own party, in the Likud Party Conference, he withdrew from the Likud party (which he had founded) and then in November 2005 (after Gush Katif was rubble) set up his own  new party 'Kadima'.

Kadima's explicit platform was to withdraw from all of the 'non-Israeli' Yehudah and Shomron. In English, the Hitnatkut policy was re-named The Re-Alignment Plan.

This led to Shimon Peres leaving the Labour Party (his home for 60 years), along with many other left wing politicians, and joining as no.2 in Kadima "to promote the Palestinian Peace Process"

When Arik Sharon had a stroke and became comatose, the Kadima Party leadership passed to Part Chairman, Ehud Olmert.

Olmert's Kadima won the 2006 General Election and, with a clear popular mandate, there was now no political obstacle to enacting the next stage/s of Hitnatkut - "Re-Alignment".

This next phase of Re-Alignment was to have been the destruction and evacuation of between 40,000 to 100,000 Jews from many (up to 100) towns and villages, including Kiryat Arba, Shilo, Bet El, Eastern Gush Etzion (Tekoah etc), Hebron, Hebron Hills, perhaps Givat Ze'ev, small settlements in East Jerusalem, etc..etc..

The first fly in Olmert's ointment was Amona - a small settlement in Yehuda. Four buildings were slated for destruction and this was upheld by the Supreme Court.

The campaign against these demolitions was not in the hands of Moetzet Yesha, who had led the Gush Katif campaign, but had returned to the grass roots, reminiscent of the Oslo campaign.

On 1st February, 2006, in a bitter clash between 10,000 security personnel (police and army) against 4000 mainly young demonstrators, hundreds were injured. Among them, my daughter Shira was knocked unconscious there by a police woman's baton, and my nephew had his arm deliberately broken by a riot-policeman.

A subsequent national enquiry found that the security forces had acted with excessive brutality, deliberately breaking bones and smashing heads of teenage protesters.

The idea of settlers hugging soldiers, as had been stage managed at Gush Katif, was history - and the future Re-Alignment evacuations would appear to follow a far more violent model, with the potential for civil war.  Many erstwhile supporters in the Kadima Party, voiced reservations and even withdrew their public support for Re-Alignment.

The final break-down of the Alignment Plan was the 2nd Lebanon War.

The disastrous 2nd Lebanon War, which was not planned, but rather spontaneously triggered by the kidnapping of Israeli soldiers on the Israeli side of the Lebanon border, resulted in high Israeli casualties, international outcry against Israel, and some tactical victories against Hezbollah.

Having spent two years focused on evacuating Jews from Gush Katif, the IDF was clearly ill-equipped to defend Israel.

On the last days of the Lebanon War, Ehud Olmert announced that the Re-Alignment Plan was 'shelved'.

With all the bitterness and grief I still feel ten years later for the residents and towns of Gush Katif and the Northern Shomron - I feel grateful that God directly intervened in the following years to prevent even more tragic destruction of vastly more people and their communities in the next planned stage/s of the Hitnatkut from Yehuda, Shomron and East Jerusalem.