Rav Motti Elon Sentenced - Should This Man Teach My Kids? 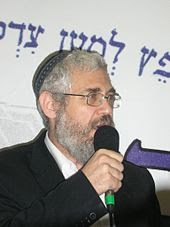 Rav Motty Elon was sentenced today to six months community service and a 15 month prison sentence on probation for three years. He was also fined 10,000 NIS as compensation for the victim.

Rav Elon was convicted in August on two counts of sexual assault on a minor.

Rav Elon's response, outside the court, was to call the allegations/charges/conviction "lies" - and he said he welcomes the community service order - "I've been doing community service for 40 years, and I would love to do so until I'm 120."

This was the culmination of a public process which started on 15th February 2010, with an announcement censuring  Rav Elon on the Takana website; the 'private' process, within Forum Takana, began several years previously.

Takana took the dramatic step of publicizing the "substantial allegations" against Rav Elon, because Rav Elon had broken an agreed behavior protocol, by continuing to teach.

At that time, the allegations received by Takana were concerning boys who were not minors (over 18) at the time of the alleged acts. These boys had chosen not to report the incidents to the police, but preferred to turn to Takana - a not-for-profit organization mandated in the National Religious community to "protect the religious community from authority figures who take advantage of those dependent on them."

Takana collected the testimonies of the alleged victims and summoned Rav Elon to the forum.

Rav Elon at that time was the blue-eyed rabbi of the National Religious community in Israel. He had been Rosh Yeshiva of Horev School, and was serving at Rosh Yeshiva of Yeshivat Hakotel. Rav Elon's shiurim were attended by hundreds, and were broadcast live on radio. Rav Elon had his own national TV show, every Friday morning, about the weekly sedra.

As a result of these discussions with Rav Elon and further investigations by Takana, Rav Elon resigned his teaching positions - and went with his family to live in the scenic Galilee village of Migdal. When he continued teaching there, Takana blew the whistle.

After Takana publicized that there were substantial allegations against Rav Elon, which generated huge public furor, other boys came forward, who reported to the police that they had been assaulted by Rav Elon while they were still minors.

The eventual charge sheet and conviction were for relatively (by the standards of these things) light sexual offences, consisting of hugging and kissing.

Although the prosecution requested that Rav Elon should be sentenced to prison time, the court decided otherwise.

Following Rav Elon's conviction, Rabbi Chaim Druckman publicly expressed support for Rav Elon, and invited him to teach at Yeshivat Or Etzion. It has been reported that Rav Elon indeed teaches boys there every Sunday night at 10:30pm. There is no indication that Rav Elon's sentencing will lead Rav Druckman to withdraw his invitation to Rav Elon.

Many allegations of sexual abuse of a minor do not result in prison sentences for the accused. Indeed, only 10% of police reports of child abuse result in a conviction in Israel.

This is due to a series of filters within the police and judicial system, to ensure that innocent people are not mistakenly convicted.

These filters have the effect of serial shrinkage of the quantity and gravity of allegations, by closing police files, reducing charge sheets, and requiring (often impossibly) high standards of proof before conviction.

However, in parallel to the legal process, there is also a hidden process of risk assessment, by the adjunct social services ("Sherut Hamivchan"), which is mandatory for sex offenders.

The authorities have such a parallel system in place to ensure that, regardless of the outcome of the judicial process, dangerous people are not permitted to endanger the public.

In Rav Elon's case, the charges were "light" and the sentence was little more than a slap on the wrist.

I have no knowledge of the "risk assessment" of Rav Elon.

However, judging by Rav Elon's failure to acknowledge the severity of the initial allegations, nor of his conviction; his total lack of expressed regret, nor any apology to his victims; and his derisory and arrogant dismissal of the sentence - Rabbi Elon seems indeed to be a dangerous "authority figure who took advantage of those dependent on him" and should therefore be prevented from ever having access to other people's children.