In a dramatic development, two appeals were submitted to the Jerusalem District Court in Jerusalem today Wednesday) - to overturn the Beit Shemesh municipal election results of 22nd October.

Beit Shemesh incumbent mayor Moshe Abutbol responded to the appeals by stating "these people have no respect for democracy", pointing out the he had won the election - and this should be respected by all parties.

Even more dramatic was the arrest of eight ultra-orthodox men, on election day itself, and the discovery of over 200 identity cards in two apartments, and in a vehicle, in the city.

Eli Cohen has since put together an investigation team which has worked closely with the authorities to discover the extent and nature of the election fraud - with the expressed aim of appealing the election results in order to have them overturned, and a new fair election called.

Large demonstrations have also taken place in front of the new Municipal Building - bringing national politicians and local activists together, to protest the use of fraud and unethical tactics in the Abutbol campaign. The slogans "We're not giving up on Beit Shemesh!" and "Purity of Elections" rallied thousands of people.

In parallel, the Cohen team appealed to the Knesset Interior Ministry's Elections Committee, presenting evidence and indications of widespread fraud and irregularities which, in their assessment, would have made the critical difference in tipping the election results in Abutbol's favour. Various ultra-orthodox MK's also attended, and lambasted Cohen and his supporters as simply being "chareidi-bashers" and "bad losers".

And Cohen's team also approached the Attorney General, Yehudah Weinstein, who initially responded that he "does not hold the authority to overturn an election result".

In parallel to all this, the police investigation has been taken to a higher level, bringing in the Organized Crime Unit to investigate the election fraud in Beit Shemesh. These are the people who take on the mafia.

In a dramatic and unprecedented break-through today, not only did Eli Cohen submit his appeal to the court, but so did the Attorney General, Yehudah Weinstein, with his recommendation to the court to overturn the Bet Shemesh elections.

This is hugely significant, in that Weinstein represents the Government of Israel to the court. Weinstein, unlike the Cohen team, has direct insight into the developments of the police investigations.

In Weinstein's appeal to the court, and in an official statement by the Ministry of Justice, they state:

"The findings of the police investigation indicate serious criminal activity, which was systematic, deliberate and institutionalised, involving dozens of people and the investment of substantial financial resources. All this was used to deliberately change the election results."

I have also participated, in a small way, in this investigation and I can concur that I found widespread gaps, inaccuracies and falsehoods in the election lists. People were listed who had moved many years ago, dead people, people who had never lived in their stated address, houses filled with impossible numbers of voters, and with a cocktail of family names.

Even if this was simply chaotic bungling in the electoral rolls, it would clearly leave huge potential for widespread election fraud, by anyone organized, motivated and immoral enough to do it.

As indeed seems to have been the case...

According to the Weinstein's appeal, organized groups called people on the voters registry, approached people in synagogues and in their homes, and offered them cash for fraudulently using their IDs and voter cards.

Weinstein's appeal has, in itself, vindicated the Cohen team's protest of the election fraud, and their refusal to simply accept the vote count and go home.

The chances of a new election in Beit Shemesh have now shot up from "highly unlikely" to "probable". The final word will be from the three judges court - they will sit to review the evidence on 10th December.

In the event they decide to proceed with a new election, it will be critically important that the whole election process be supervised by the police, that people who supervise the balloting and count the votes are scrutinised and imported from outside Beit Shemesh - and that every safeguard is used to preserve the "purity of democracy".

No less important is the tone and content of the campaign itself.

The official Abutbol campaign was characterised by outrageous rhetoric and inciteful statements.

Holocaust imagery - such as crying ultra-orthodox kids behind barbed wire fences - was used to frighten voters into voting for Abutbol. This was taken up in the streets by people who hurled "Nazi" epithets at Cohen and his supporters. 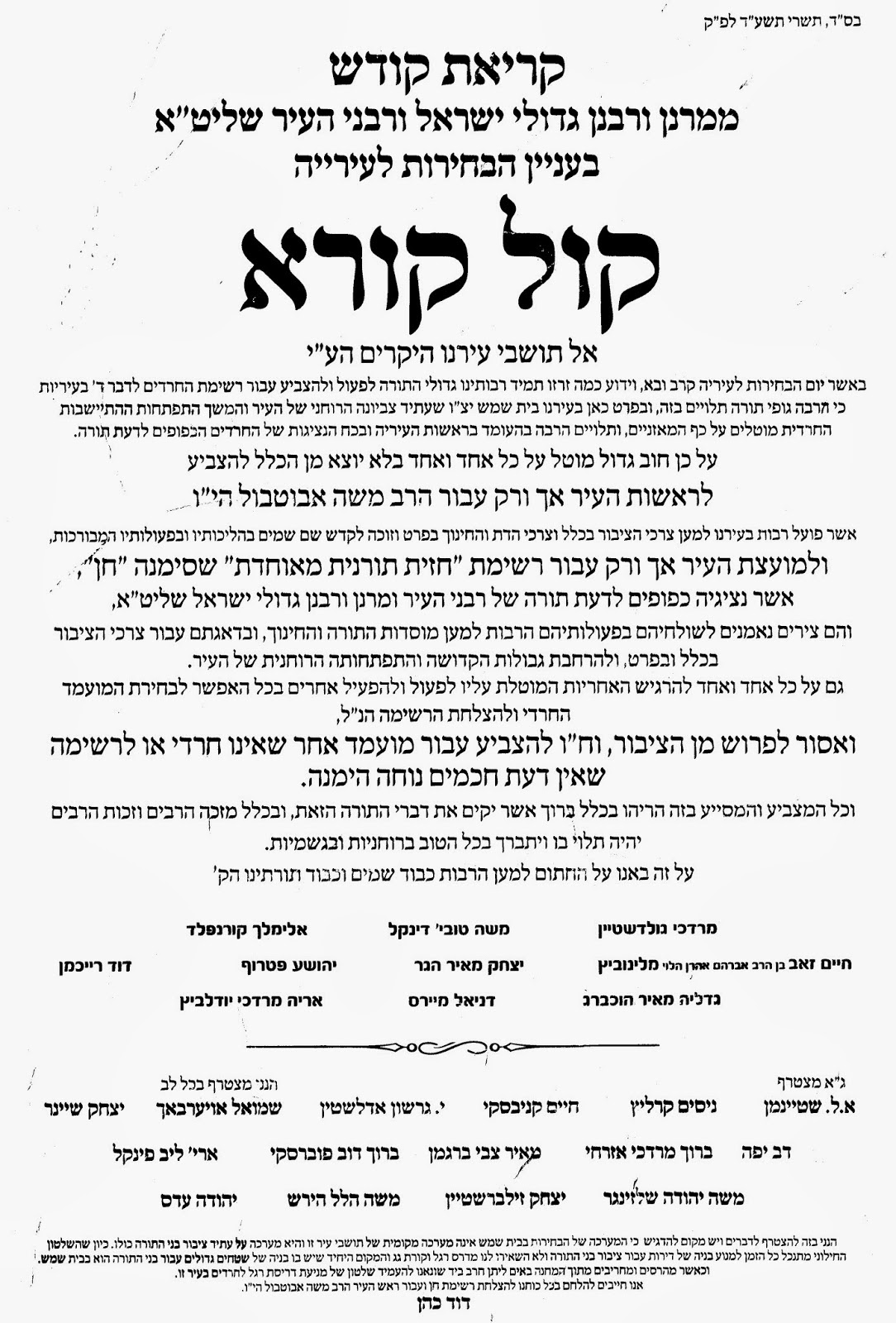 Illegal "Kol Korei" announcements were openly published in Moshe Abutbol's propaganda newspaper, Chadash, and proudly hung in many synagogues. These went far beyond the permitted "endorsement" of parties and candidates, and crossed the red line into criminality (5 year prison sentence) by claiming to be speaking in the name of God, dispensing blessings (on supporters) and curses (on anyone who voted against the prescribed party/candidate). Even several anglo community rabbonim signed up on these documents - who have no excuse for failing to understanding the principles & practices of of western democracy.

The next election, whether in a few week's time, or in five years time, must take heed, learn from and fix the criminality and excesses of the October 2013 Moshe Abutbol campaign.