By Rabbi Dov Lipman
(some photos are illustrative only) 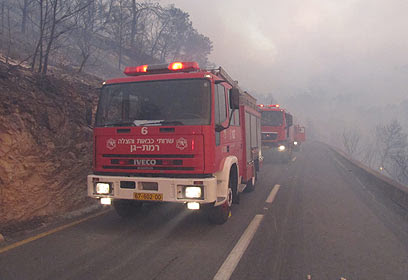 1)NEW FIRE STATION AT THE ELAH JUNCTION
A new fire station opened this week at the Elah junction.  This station will provide better services for residents of RBS and will also help deal with the forest fires which often erupt in our region.  30% of the country's forests had been under the auspices of the Bet Shemesh station and the new station will ease the burden of the Bet Shemesh station.  Interior Minister Eli Yishai attended the grand opening of the new station. 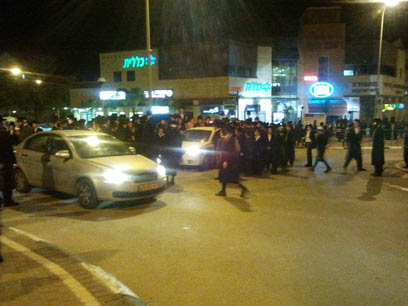 2)MAYOR CALLS FOR "NO VIOLENCE" IN THE CITY
Mayor Abutbol held a press conference this week to announce a new program geared towards rooting out violence from the city.  A new hotline has been established for residents to report any violent acts.  This will enable the city to monitor where violence is most prevalent in order to direct cameras and other violence prevention measures to those areas.  Residents are asked to report all acts of violence to 054-954-5555 orlolalimut@beitshemesh.co.il.  It should be noted that controversy erupted after it was discovered that signs related to this new program were not hung in the Chareidi neighborhoods.  The Mayor used that same press conference to announce that the new city booklets will include women's pictures and they simply won't be distributed in Chareidi areas.

3)SUCCESSFUL DEMONSTRATION OUTSIDE PRIME MINISTER'S OFFICE
For a few weeks there had been discussions regarding the importance of a protest before the weekly cabinet meeting to continue to keep up the awareness of the violence in Bet Shemesh.  The struggle was always the fact that people work and cannot be there at 9:00a.m.  This past Sunday a small convoy of cars drove to the Prime Minister's Office and generated immense press coverage.  At the protest, the small group which included Natalie Moshiach who was attacked in RBS Bet a few weeks ago, listed over 30 violent attacks which have taken place since 2002.  The story received coverage on all the major networks and in all the major newspapers.

4)APPEAL REGARDING RBS GIMMEL 2 PUSHED OFF TO MARCH 4
The appeal regarding the current plans for RBS Gimmel 2 has been pushed off to Sunday morning March 4 in Bayit Vegan at 9:00a.m.  The city's attorney is using the arguement that the appeal is the work of a handful of political activists in the city and, therefore, everything should be continued as planned.  In order to succeed in the appeal, we are going to need hundreds of residents to come that morning.  We will have buses for those who do not want to drive.  This is so important that I am going to ask people who can to please take off a half day of work to be there.  Please let me know asap if you can be there for the appeal on that morning.

5)POLICE CRACK DOWN ON ILLEGAL ARAB WORKERS
The national police came into the city this week to address the issue of illegal Palestinian workers throughout the city.  They arrested 146 workers who stayed in the city illegally, including 80 who were found sleeping in actual construction sites.  The police also arrested some people who hired the workers and those who transported the workers to the area.  Five of the people involved will have a criminal file opened against them.

6)OPEN UNIVERSITY IN BET SHEMESH
The Open University will begin operating in Bet Shemesh this March.  An informational meeting will be held on Tuesday February 14 between 6:00p.m. and 8:00p.m. at Branco Weiss.  For more information please call Richard Peres at 052-272-4155.