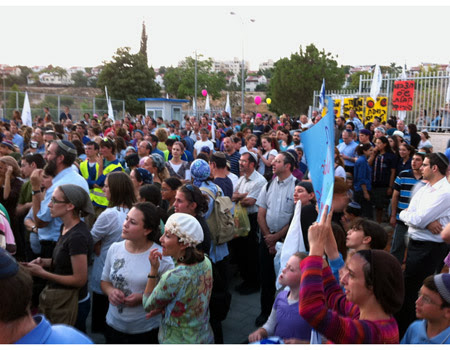 (This photo courtesy of Yissachar Ruas)
The recent chaos surrounding the opening of the new school building for Orot Banot, in Beit Shemesh, seems to have reached a resolution, and the girls, staff and parents started the new school year this morning in their spanking-new school building – on the red-letter-day of 1st September.
There has been a lot written about the dispute – how it started, the various claims of the parties involved, the protest activities etc – in the local, national and even international press (a friend who returned from a trip to the USA said people he met in the USA were asking him about "what's the story with Orot Banot?!").
For those unfamiliar with the dispute, I refer you to Haaretz, YNet,  Arutz 7, Jerusalem Post, the protestors' Facebook Page, and the RBS blog Life In Israel.
At the milestone 1st September point, the traditional start of the Israeli academic year, I declare the Victors are:
The Young Girls - who can now study at Orot Banot, in appropriate & respectable facilities.
The Vaad Horim (PCA) of Orot Banot – who stepped up, mobilized the community and brought national resources to fight their side.
Shaalei Torah – the parent organization of Orot Banot, under Rav Nissimi – who now have two beautiful new school buildings, which they worked hard to build.
The National Religious community – with particular kudos to the residents of Givat Sharett.
Beyachad - Shalom Lerner & Jacki Edri were highly active throughout the campaign and strongly supported the protests
The Israeli Government – including the Ministry of Internal Security/Police and the Ministry of Education – who came to battle for justice and the Law in Bet Shemesh.
Life In Israel blog and Facebook – which provided the Winners with a platform.
The Losers are:
The Kanoim/Extremists  - who tried to use mafia tactics to frighten law-abiding residents
Mayor of Bet Shemesh – Moshe Abutbol – who was outflanked, exposed lying, and eventually by-passed
City Spokeman - Matti Rosensweig – who trumpeted falsities & nonsense, and was rapidly exposed
The Chareidi Parties (Gimel and Shas) – which failed to use their influence, and instead succumbed to their loony right.
Those Who Lost By Absence
The 'moderate' Chareidim - the overwhelming majority have very little in common with the Kanoim who caused the rumpus – but failed to disassociate themselves
Tov – the local moderate Chareidi party, which failed to take a stand for Reasonableness & Moderation – which is usually their rallying cry.
Of course, this story may not be over yet...
But in the meantime, the "Orot Banot" Winners should take a few moments to enjoy the sweet taste of Victory!
beit shemesh orot banot