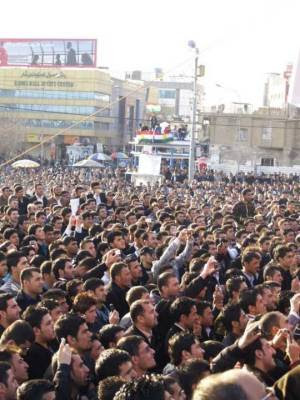 The speed and scope of rebellions across North Africa and the has been dizzying.
Absolutely no-one seems to have predicted this current and dramatic tidal-wave of unrest and even regime change. , , , , and now …
Commentators have been guessing where the axe will next fall.
The Turkish newspaper Hürriyet Daily News has predicted that the Kurds of Turkey are ripe for revolt.
“The Arab Spring may lead to a Kurdish Summer”, they have suggested.
There are estimates between 14-20 million Kurds in – approximately 15-20% of the country’s population. There are also some 1 million Kurds in , and 2 milion in .
The hostility of the Kurds to the Turkish Government is long standing. Revolts go back at least to 1925, and include a major rebellion by the separatist PKK (Kurdistan Workers Party) which started in 1978, and overflowed into Kurdish northern . Over 40,000 Kurds are reported to have been killed in these hostilities. It has been estimated that 3000 Kurdish villages were “wiped off the map” and some 300,000 Kurds were allegedly displaced.
It may be significant that in the past two month (March and April 2011), there have reportedly been large demonstrations by Kurds against the Turkish authorities, in , and the largest Kurdish town . The Government forces are reported to have killed one demonstrator.
The paper Defense News reported on April 11 that officials in are increasingly alarmed at the prospect of revolts against regimes around the Middle East, and especially those in , may inspire widespread revolts in ’s own backyard.
Of course, commentators' guesses are simply that, and given the past four months of unpredicted changes in this part of the world, the only reasonable forecast, is this that the future developments of the rebellions will also not be predicted….
kurd turkey