The Third Temple as a Political Objective

This week’s riots in Jerusalem reminded us that the most volatile location in the Middle East (and arguably in the World) is Temple Mount in Jerusalem.

In September 1996, the opening of the exit of the Western Wall Tunnels resulted in false rumours being spread around the world (CNN, BBC et al) that the Tunnels were directly under the Dome of the Rock, and were aimed to undermine and destroy the building. The riots which ensued claimed over 80 dead, and almost started what later became the 2nd Intifada. (Prime Minister Benjamin Netanyahu’s nifty footwork, encircling Ramallah with Israeli tanks, prevented the riots spreading).

On 28th September 2000, then Prime Minister Arik Sharon’s visit to Temple Mount , was seen as the actual start to the 2nd (“Al Aksa”) Intifada – a terror war which cost 5500 Arabs and over 1000 Israeli dead.

So when around 15 Jews entered Temple Mount on Sunday 27th September, 2009, and Arabs started rioting, the potential consequences were a cause for concern. Secondary riots indeed started in other East Jerusalem locations, and abroad, reaching even Istanbul, Turkey (from where I write this piece). Israel is still in a state of alert, lest riots again spread around the country.

Considering the centrality of Temple Mount to the political and security situation in Israel, it is astounding that Israel does not seem to have forward-looking strategic policy about the status of the Mount.

Whereas Jews are highly restricted from visiting the site, by the Israeli authorities, including being forbidden to pray there, this is a tactical response to the volatility of the location, rather than a strategy. 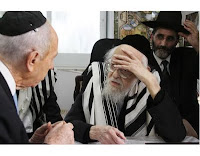 Rav Elyashiv, accompanied improbably by President Shimon Peres, reaffirmed this week that he holds that it is forbidden by halacha to visit Temple Mount.

On the other hand, increasing numbers of rabbonim now permit, and even encourage, observant Jews to go up to Temple Mount – such as the group of 15 “settlers” who went up last week (athough I saw a report they were French tourists).

Again, these responses seem to me to be a tactical, rather than a strategic, approach.

Surprisingly, the nearest Israel has come to a forward-looking diplomatic position regarding Temple Mount was during the ill-fated, last-ditch negotiations at Taba in 2001, between Ehud Barak, as Prime Minister, and Yasser Arafat.

Having offered Arafat 97% of land East of the Green Line, including the re-division of Jerusalem into Al Kuds/Yerushalaim - the break-point was reached when the issue of Temple Mount was addressed.

Barak made strong statements back in 2001, regarding Temple Mount, saying “my government will not agree to transfer the Temple Mount to foreign sovereignty: Two thousand years ago, there was no mosque or church on the Temple Mount, but only the Jews' Holy Temple... This holy place is a fundamental anchor of our Zionist and Jewish essence."

According to Ron Pundak, an extreme left wing negotiator of the Oslo Accords, and who was critical of Barak’s handling of the negotiations at Taba:

Barak added fuel to the fire in the form of an Israel demand to change the status in the area of Haram El-Sharif [ed = Temple Mount] by building a Jewish synagogue within the boundaries of the sacred compound. Such an act had not bee contemplated for 2000 years since the destruction of the Temple in 70 ad.

Interestingly, the synagogue on Temple Mount plan was raised again, just this week, by Balad leader Dr. Jamal Zahalka who asserted that “recent conspiracy theories may not be unfounded, speculating that Israel was possibly "planning to build a synagogue" on the Temple Mount.” (JPost)

Aside from this, I am not aware of any discussions or negotiations in over 20 years of on-off dialog between Israel and the Palestinians, which have addressed the future status of Temple Mount.

The only other political figure who I am aware has stated a strategic plan for Temple Mount, is from the other end of the political spectrum, Moshe Feiglin of Manhigut Yehudit/Likud, who has stated:
"if I become prime minister I will take away control over the Temple Mount from the Wakf [the Islamic trust] and reinstate Jewish sovereignty over the entire mount and, hopefully, rebuild the Temple."

I do not believe that any of the major Israeli political parties have a declared strategy or policy regarding the future of Temple Mount in their manifestoes, nor the Israeli Foreign Office have a Policy Paper on the subject.


So, with trepidation, given the unique and critical importance & sanctity of the location, and the dearth of forward-looking political strategy being discussed openly or promoted, I offer the following thoughts about a political objective for the future of Temple Mount.


It is undeniable that “Peace Negotiations” will take place between Israel and the Palestinians. And it is inevitable that these negotiations will focus on a quid-pro-quo arrangement. You do this, and we’ll do that.

And Territory will be on that negotiating table; the final lines of partition between Israel and Palestine will be a matter for speculation - .but the Israeli built security barrier today looks and feels like a national border for tomorrow.

I do not know whether these strategic ‘peace’ negotiations will take place in a month, or in ten years, or longer… But to deny the overwhelming probability of the event itself, is to defy 30 years of Israel’s diplomatic history and all future rational projections.

In the split between Jewish Israel and Arab Palestine, Temple Mount will be discussed again, as it was by Barak and Arafat. 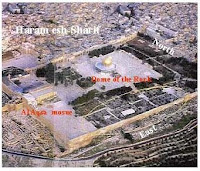 I propose that Israel’s red-line position in these negotiation should be an inviolable demand for half of Temple Mount.

Half, because the whole substance of the negotiations will be division of assets and the splitting up or halving of Eretz Yisrael itself.

To be more specific, the Israeli demand should be for the Northern Half of Temple Mount.

This would give the Arabs the Al-Aksa Mosque, on the South, which is the holiest site on Temple Mount for Moslems.

And it would give Israel the site of the Kedosh Hakedoshim (Holy of Holies). The beautiful (but less sacred than the Al-Aksa for the Moslems) Dome of the Rock could be moved several meters South.

And I would agree with Moshe Feiglin’s bottom-line political objective: Building the Third Temple.

Like building a Jewish State itself, this project can not rely upon the hands-on support of the Litvish rabbonim and their followers. For they will surely oppose the building project – as indeed Rav Elyashiv has joined with Shimon Peres in forbidding Jewish entry to the Mount today.

The difference between the strategic political approach proposed here, and that of Moshe Feiglin, is that it is the unfortunate reality that Moshe is very unlikely to be Israel’s Prime Minister, and even if he is, he would lack the political forces, nationally and internationally, required to implement his building plan. The confrontation against every other country in the world, and the internal opposition in Israel, would render such a plan unachievable.

On the other hand, negotiations are (regretfully) very likely to take place between Israel and the Palestinians, and Temple Mount will inevitably feature. In the future as it did in the past.

While Moshe and likeminded friends will be outside in the streets, defiantly protesting, the strategic future of Temple Mount will be handed over to the responsibility of Ehud Barak, or worse.

That darkest moment in Israel’s diplomatic history, severing Eretz Yisrael, can, ironically, be the most promising moment in our 2000 history of galut, to justly, fairly and openly demand our National Heritage and most fundamental Religious Right.

Just Half of Temple Mount. And a Building Permit.

And think about it for a moment - what would YOU be willing to give up, if you were at that negotiating table, to achieve that?